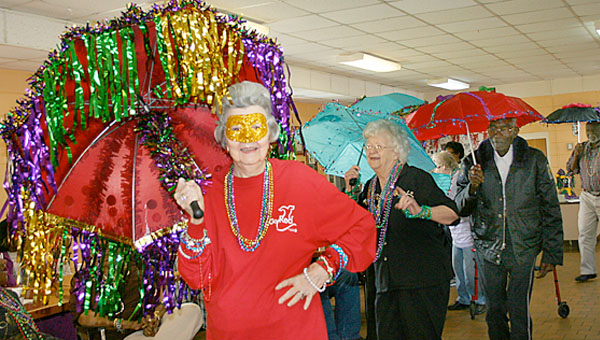 Participants at the Lillian D. Green Nutrition Center joined the Mardi Gras fun on Fat Tuesday with an impromptu parade.

Some folks have to roll out the barrels to have fun but not at the Lillian D. Green Nutrition Center in Troy. They just pop up the umbrellas and the fun showers down.

The participants at the nutrition center celebrated Mardi Gras Tuesday in the best way they knew how – by stringing colorful beads around their necks and dancing the boogie-woogie under decorated dollar umbrellas.

“Mardi Gras is something that we had done in the past and, about a month ago, we were talking and our participants said that they would love to go to Mardi Gras but couldn’t deal with all those people,” said Hassie Green, nutrition center director. “So, I said, ‘Let’s just have Mardi Gras here.’ They loved the idea of having a Fat Tuesday party here at the center.

“Mardi Gras is French for Fat Tuesday and it’s celebrated in Mobile and New Orleans but we had just as much fun here. We decided to decorate umbrellas because that’s part of Mari Gras celebrations.”

Green has been to several Mardi Gras celebrations and has brought back tons of beads to give away to Center participants. So the participants decided to wear lots of beads, decorate umbrellas and dress in Mardi Gras colors, which are purple, green and gold.

“Purple is symbolic for justice, green represents faith and gold means power,” Green said. “Most of those who participated used those colors to decorate their umbrellas and, of course, the breads were the Mardi Gras colors.”

Forty-eight participants at the Lillian D. Green Nutrition Center celebrated Mardi Gras but not all of them dressed and danced. But, to a single one, they enjoyed the traditional Mardi Gras combination of Moon Pies and RC Colas.

But Moon Pies aside, Green said the Mardi Gras celebration at the Lillian D. Green Nutrition Center gave the participants an opportunity to use their creativity and to frolic a little.

“And a good time was had by all,” Green said. “And we showed today that seniors have still got it!”