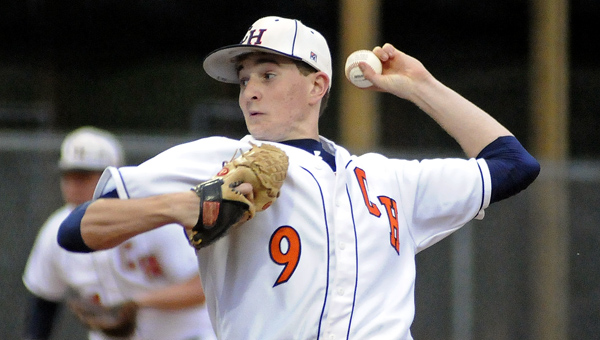 Very rarely in the past two seasons have the Charles Henderson Trojans suffered through a losing streak of any kind.

But that was the case going into Tuesday’s double header against Brantley at Frazier Field.

As it turned out, a combination of strong pitching and timely hitting was just the right medicine, as the Trojans changed a two-game losing streak to a two-game winning streak.

On the mound for the Trojans in game one was sophomore Tripp Blackmon and for most of the game, he was all but unhittable.

With the exception of one batter. In the top of the fifth inning, with his team up 10-0, Blackmon needed just three more outs to record his first no-hitter, however, Reed Kilcrease ended that bid with a single to center field.

“It was on my mind a little,” Blackmon said. “I tried to push it aside and focus on what I needed to do.

“I sort of had to regroup myself after the hit, knowing that I had to get three more outs.”

The left hander did just that, striking out the side to end the game and get CHHS back on the winning side of things.

“It was a great outing,” head coach Derek Irons said, “but he really didn’t do anything unbelievably great.

“He threw strikes and guys made plays behind him. He didn’t have any walks and no hit batters and that’s one of our basic philosophies. He didn’t give anyone freebies and when you do that, good things happen.”

Blackmon finished with a complete game, striking out seven.

At the plate, the Trojans bounced back from a five-hit, three-run outing on Monday against Trinity with a 10-run, nine-hit performance against the Bulldogs. Dalton Harris got CHHS on the board with a two-RBI single in the second inning and in the third, the Trojans struck again, scoring four runs, thanks to a two-RBI by Joey Denison single, followed by an RBI single from Michael Fox and an RBI double from Chase Smartt.

In the bottom of the fourth, it was Chase Connell who struck for CHHS.

After Austin Adler and Blackmon reached base with a walk and a single, Brantley intentionally walked Jalin Lawson to pitch to Connell, who was 0-2.

On the third pitch of the at bat, Connell smacked the ball over the left center field wall for Grand Slam, putting CHHS up 10-0.

“That wasn’t what I was planning on doing,” Connell said with a smile after the game. “But I’ll take it. I was just trying to do my job.”

In game two, the Trojans picked up right where it left off, scoring runs in the first four innings. The game was broken wide open in the fourth inning, when CHHS had seven players cross the plate.

On the mound, the senior Reeves threw four innings giving up just three hits and one run, while striking out two.

Brantley Lecroy finished up the game, striking out two in the final inning.

“On Monday night, we were 0-4 on both. So, we were just trying to keep things simple. I think (Tuesday) it was just important that we play good baseball, and I thought we were better. We still have flashes of immaturity but overall, we played better baseball and that is something that should lead to wins.”

In the two games, the Trojans finished with 18 hits and 22 runs scored in eight innings at the plate, while the Bulldogs finished with just four hits and one run in 10 innings.

The win improved CHHS to 6-3 on the season.

After competing in three games in a two-day span, the Trojans will have two days off before heading to Wetumpka on Friday and Thompson on Saturday.

“Based on what we expect from our guys, I would say we played good, but not great,” Irons said. “We did a lot of things well, but there were a couple of plays defensively where we had some break downs, but our guys on the mound pitched around it. For the most part, we judge our games by our games goals and we were 4-4 on both sides and we are pleased with that.”