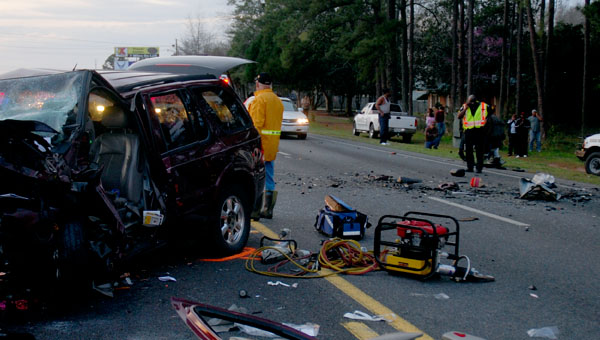 Alabama State Troopers are still investigating the cause of this two-vehicle wreck that claimed the lives of two Pike County women and left a 15-month-old child critically injured on Monday.

A 15-month-old child has become the third victim to die after a two-vehicle wreck Monday night.

The accident took place just three miles north of Brundidge at approximately 5:15 p.m.. A 2004 Buick driven by Teresa Adams, 38, of Brundidge, was heading southbound on U.S. Highway 231 when for unknown reasons it crossed over the median and struck a 2008 Nissan Rogue heading northbound. The Nissan was driven by Brittany Shepard Pugh, 24, of Troy.

Pugh was pronounced dead at the scene, while her 15-month-old child was transported by Life Flight to Children’s Hospital in Birmingham. He died later that night, according to information from the state troopers.

Adams was transported from the scene to Baptist Medical Center South in Montgomery, where she died shortly after 7:30 p.m.

Dane Linton, an eye-witness, was traveling north on U.S. Highway 231 when he heard what he said could be described as a loud boom.

“I was traveling north on 231 and a vehicle was passing me, this white Nissan Rogue,” Linton said. “And, then all of a sudden B-A-M, just the loudest sound I had ever heard went off.”

Linton said the accident happened fast, but that, from his vantage point, he was able to see what happened and was shocked when he saw one of the vehicles overturn.

“This maroon-colored vehicle came into the lane and hit this Nissan Rogue head-on,” Linton said. “And, I saw this car flipping in my rear-view mirror.”

“It happened right to the side of me and I could catch a glimpse of it,” Linton said.

Looking on toward the scene of the accident, Linton shook his head and, like so many there, just couldn’t believe what had happened. “Life is very fragile,” Linton said.

State Troopers continue to investigate the circumstances surrounding the crash. No further information was available.