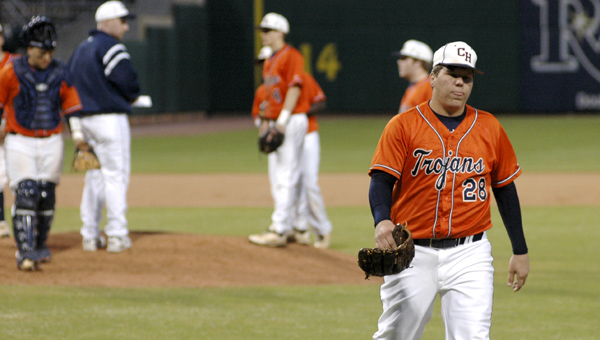 Above, senior pitcher Blake Hutchinson walks into the dugout after being taken out of the game in the middle of the fourth inning, Monday night. The Trojans fell to the Wildcats of Trinity at Riverwalk Stadium by the score of 7-3. (Photo/Greg Rossino)

Going into the weekend, the Charles Henderson Trojans were scheduled to play in some of the most historical baseball fields in Montgomery.

Thanks to the Saturday’s increment weather, those games were canceled.

However, two days later, the Trojans found themselves back in Montgomery and playing at the home of the Biscuits, Riverwalk Stadium, against Trinity Presbyterian School, which is based out of the Capital City.

For a moment, all was well for the team from Troy, as it looked to bounce back from a loss Friday night to Alabama Christian at Faulkner University.

But like the weather Monday night, the Trojans were left cold and bitter, as the Wildcats would overcome a 3-1 deficit and march on to a 7-3 win.

“We have had days (like Monday) where we start off fast and not finish. And then we have had days where we don’t start off well and finish strong. I think right now, it’s a maturity thing. I don’t think it’s a lack of effort, just lack of execution.”

Senior Blake Hutchinson got the start on the mound for CHHS.

After keeping the Wildcats scoreless in the first inning, the right hander found himself in trouble in the second and third innings thanks to a string of hits and some miscues in the field.

After CHHS took a 2-0 lead going into the second inning, Trinity cut the lead to 2-1.

In the top of the third, back-to-back doubles from Greg Barnett and Tripp Blackmon made it a 3-1 game, but that lead would not last into the next inning.

In the bottom of the third, Trinity put a four-spot on the scoreboard off of four hits and two errors, to take a 5-3.

As it turned out, that was a deficit that was too much for CHHS to overcome, as the Wildcats would score another run, this time off of reliever Houston Mabray to secure the four-run victory.

“One of our basic philosophies on defense is we have to dominate the average play,” the coach said.

“That bottom of the third was the turning point in the game. We had just scored a run in the top of the inning, and we hold them to nothing in the bottom, it’s 3-1 and we feel like we kind of control the momentum. Instead, we don’t make the plays and they take the momentum and we never got it back.”

The loss marks the first time since May 5 of the 2009 season that the Trojans had a lot back-to-back games.

“That was something we talked about earlier in year, about how important it is to bounce back from a loss,” Irons said.

“We weren’t able to (Monday), but this team has to find its own identity. We are young and kind of struggling to do that right now.”

CHHS will have a chance to redeem itself immediately, thanks to a double-header today, against Brantley at Frazier Field.

“This is a big, big week for us,” Irons said, “we are playing as many games as we played all year, this week.

“In the life of our season, this is a big week. We didn’t start it off like we wanted to, but that doesn’t mean we can’t finish like we wanted to. I think it helps that we are playing again at home. It will be good for the guys to be back at home and to get right back on the horse, so to speak.”

The home games today are the first the Trojans have had since the Opening Day double-header back on Feb. 21.

First pitch for game one will be at 4 p.m., with game two beginning about thirty minutes following the final out of the previous game.