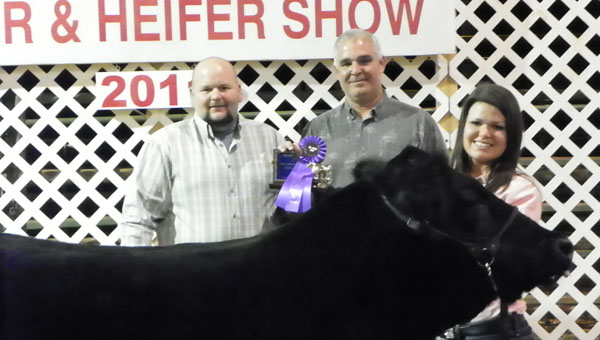 And, right in step with Johnson, Morgan Graham, a Pike Liberal Arts 10th grader, showed both the Reserve Champion steer and heifer.

The Native Steer recognition was awarded to Jonathan Thomas.

“This was a great show with great cattle. I wouldn’t have wanted to judge it even if I knew what I was doing,” show volunteer Tammy Powell said laughing. “These six young people have worked tremendously hard and really put forth the effort that it takes to show great calves. Seeing them in the ring, it was obvious how hard they had worked all year long. We were fortunate that we had such a good judge in George Richburg, who is with the beef unit at Auburn University.”|

Powell said Johnson and Morgan have both been showing calves since they were in fourth grade and their experience was evident.

“And, they had good animals to show,” she said. “Both of these young women have learned a lot through their projects about dedication and perseverance as well as about livestock. They can now consider livestock as a business if they choose to do so because they will have retained a great deal of information about the livestock industry.”

Other awards were presented in showmanship, heifer and steer categories and specialty awards.

Josh Graham received the award for the best records.

Morgan Graham was the first place winner in the Best Daily Rate of Gain and Clay Powell was second.

All six of the young people are eligible to compete in the District Steer and Heifer Show in Montgomery on Wednesday and Thursday and have an opportunity to qualify for the state show Friday through Sunday.

“These young people are to be congratulated for a job well done and we wish them well as they move on the district competition,” Powell said. “We also congratulate the parents, grandparents and all other family members who have worked with them and supported them throughout the year. Showing calves takes the whole family and we appreciate the efforts of everyone.” The 69th Annual Pike County Steer and Heifer Show was sponsored the Pike County Cattlemen’s Association, the Pike County Cattlewomen’s Association, the Pike County Extension Office, Alabama Cooperative Extension Office and the National FFA Organization.