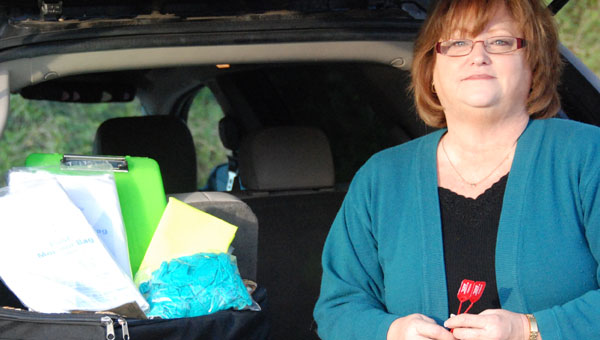 Sandy Nasca's background in forensic medicine helps her in her role as deputy coroner in PIke County.

Her name is Sandra Nasca and she possesses an extensive knowledge in the forensic sciences, much like the medical detectives you might see on TV only she’s real and the job she performs actually matters.

Nasca, who has recently taken the position of Pike County’s first deputy coroner, is a certified medical investigator and enjoys the various complexities her job presents.

Nasca remembers the early childhood influences that led to her desire to become the forensic expert she is today.

“My father was a crime scene Captain, so at an early age I was kind of exposed to it,” Nasca said. “There was also a program on TV, called ‘Quincy M.E.,’ in which Jack Klugman played a forensic physician, and I loved that program. It’s because when you do these particular jobs, it’s like a puzzle and you’re trying to put all the pieces of the puzzle together. It’s challenging, and so, I really like that.”

Nasca said she also remembers that, at that time, her father would bring home pictures from crime scenes and would ask her what she thought about what she saw in the photographs.

“That kind of piqued my interest, so when I had the opportunity to do it, I thought to myself, ‘this is good’,” Nasca said. “I liked it and just went for it, but had no idea I would ultimately end up where I am now.”

Nasca said she had been practicing trauma nursing for quite some time and got her start in clinical forensics when she attended a National Emergency Medicine meeting about six years ago.

“One of the breakout sessions was on clinical forensics,” Nasca said. “After the conference was over, I contacted the physician who had actually given the lecture and she said the course was available, but that it was offered in Charlotte, N.C.”

Nasca, who at the time lived in Florida with her husband Lenny and their eight children, said she had the support of her husband and left for Charlotte to work toward earning her certification in clinical forensics.

“Clinical forensics is evidence retrieval in the ER, the OR, or the crime scene,” Nasca said.

Nasca said that the skills she brings to the table allow her to look at a person’s medications and get an idea of what their medical history was.

“Symptomatically, a family may say, regarding their deceased, that ‘this’ is what they were doing before ‘this’ happened,” Nasca said. “Based on that information, you can kind of get an idea of what may have caused the death.”

Because she possesses a medical background, Nasca offers a different set eyes and a fresh perspective to her job, which help her to teach others to distinguish between what people know to be “true” from watching TV shows about medical investigators and what is actually the case.

Nasca said that when she goes out on calls she determines whether a body needs to be sent to have an autopsy or not based upon what she actually sees at the scene, by the information given to her by the people present at the scene and by what the scene itself tells her.

“We have to go out on every call we get, even if it’s an elderly person,” Nasca said. “For example, they may have an unknown history and have passed away, but we don’t know why and so we will still have to go out and investigate.”

Very few people are actually familiar with the activities that take place at a coroner’s office or the types of jobs they perform.

Some of the general activities that are performed by the coroner and deputy coroner include: certifying the cause and manner of death; notifying next of kin; testifying in court; investigate all cases as mandated by law; coordinating organ donations and collections; file timely reports to agencies; and participating in disaster planning and practice, as well as many other tasks.

The investigative fervor with which Nasca performs her duties is often times impressive to law enforcement officials.

Nasca said that the reason law enforcement is fond of her and her skills is because, often times, she is able to identify the drugs at a scene, even if they’re not labeled.

Nasca has worked with Williams for a little more than 14 months and her new position simply moves her into an official capacity doing what she’s already been doing.

“When he is out of town, I take calls for him and assume the duties of what he does as a coroner,” Nasca said.

Another aspect Nasca said she likes about her job is helping to provide some sense of closure for family members of the deceased.

“If the way we present at a scene gives the family members any kind of comfort at the loss of a loved one, then that makes it worth it,” Nasca said. “I enjoy what I do very much.”

Williams, expressing his appreciation of Nasca and her expertise, said that Nasca is a valuable asset to the coroner’s office.

“She has just been an invaluable resource, because of her certification and because she is a good investigator,” Williams said. “She has the other qualities that the office doesn’t require, which prove to be very helpful. She’s compassionate, she understands the difficult situations that we deal with and, to me, that’s almost as important as having the other skills, is knowing how to take care of people in very difficult times.”