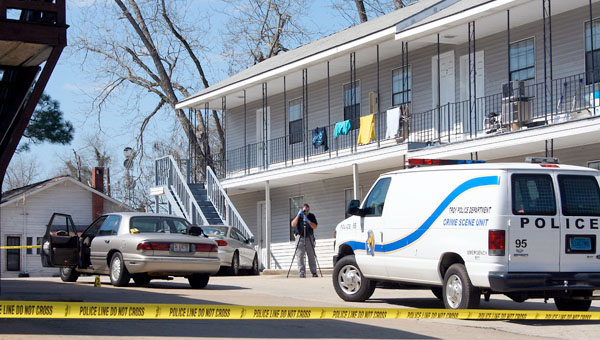 Police investigators searched for the suspect involved in a shooting at the Chandler Apartments on Folmar Street Thursday afternoon in Troy. A man was critially injured, according to police.

A Brundidge man has been charged with attempted murder in connection with a Thursday shooting.

Pugh is charged in connection with a shooting that took place earlier Thursday afternoon at the Chandler Apartments on Folmar Street in Troy.

Scarbrough said police believe Pugh shot another man at “fairly close range” in the “upper torso area.” The shooting took place in the parking lot of the complex.

The victim, whose name was not released, was in critical condition in a Montgomery hospital late Thursday, Scarbrough said.

Scarbrough said police were continuing to investigate the incident, but they believe it to be domestic in nature.

“I believe when all is said and done this is going to be domestic,” he said.

At the time of the incident, apprxoimately 11:30 a.m. thursday, Pugh fled the scene in a gold Buick Roadmaster. At the time, police reported that a woman and two juveniles were in the vehcile with Pugh.

Jaine Treadwell contributed to this article.