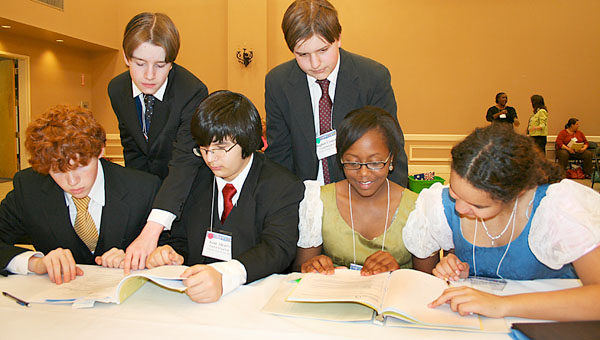 The assembly opened at 8:30 a.m. Thursday and will conclude with the banquet and awards session this afternoon.

The students are tackling global issues and gaining insight into the history and culture of other nations.

“That’s the purpose of the Model United Nations – to learn more about other nations and their problems,” said Paul Gilbert, an advisor for the eight Charles Henderson Middle School delegations.

Seventh- and eighth-grade students have the opportunity to participate in the Model United Nations and many of the CHMS delegations were attending the assembly for the second time.

“The second-year students come back more confident and are able to better present their resolutions,” Gilbert said. “It’s not easy for a young student to stand before a large group of people and present a resolution and argue for or against resolutions. Participating in the Model United Nations is a real confidence booster for all the students.”

Gilbert said a lot of work has gone into the preparation of the delegation’s resolutions.

“The students have done a lot of research into the culture of their countries,” he said. “They have to research the problems the county is experiencing and identify the problem that they feel needs to be addressed most. They have to research the native clothing of their country and the native tongue of that country. It takes a lot of time and effort on the part of the students but it’s worth it.”

Zack Calhoun, a second-year participant with CHMS, agreed that the Model United Nations is a valuable learning experience for all participants.

“You learn about the country you represent and the problems that it is having and try to think of ways that the United Nations could help,” Calhoun said. “Our country is the United Kingdom and it’s a lot like the United States.”

“Our idea is to interview people about nuclear energy and do a survey on what is being done and what else can be done,” Montgomery said.

Holman Outlaw, a Brundidge youth and a member of the D.A. Smith Middle School Mongolia delegation, said Mongolia is plagued by organized crime and drug trafficking is rampant.

“What must be done is better patrolling of the borders and utilizing more effective scanning devices,” said Neal Siegfried.

Skyler Sanders, also of the Mongolia delegation, said the Model United Nations is a fun and learning event.

“We find out about governments all around the world and all the problems that they have,” he said. “And, we learn how important it is for these problems to be solved.”