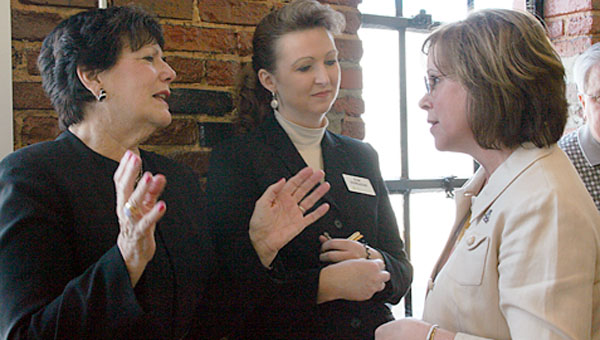 New Pike County Chamber of Commerce Kathleen Sauer talked with Kim Edwards and Donna Schubert after the Thursday morning press conference to introduce her to the community.

Chamber Board President Adam Drinkwater said that, after an intensive search, Kathleen Sauer was selected to lead the Chamber into a very promising economic future.

“Two years ago, the Chamber developed a strategic plan that would give Pike County a strong identity and a greater presence,” Drinkwater said. “To put that plan into place required a leader that could set Pike County apart. The search as been long but we are excited to have found that person in Kathy Sauer. The wait was worthwhile.”

Pike County is far from the “Peak” in Colorado that Sauer has scaled but she said there are no limits to the height Pike County can reach in all its endeavors.

“Pike County is bold and it is progressive,” the new Chamber president told the gathering at the press conference. “I was born in California but raised in Wyoming and Colorado. And, I was thinking about how Zebulon Pike went west and discovered the Peak and now I’m reversing his trek and coming back east and south to Pike County.”

Sauer expressed appreciation to the Chamber board of directors for selecting her as the Chamber president.

“This is a great opportunity for me and I’m looking forward to being back working in the community,” she said.

Sauer said that she has been to different counties across the state that have grown strong economic programs. So, she knows first hand that it takes strong and dedicated leadership to build and grow economic programs.

“We have that here in Pike County,” she said.

Monday was Sauer’s first day “on the job” and she said that she already feels like family. She described the character of the county as “relaxed sophistication.”

“Everyone has been very hospitable and willing to talk,” she said but added that she visited Pike County many times prior to becoming Chamber president. “I’ve been all over the county and I know that we are ready to move forward in economic growth.”

Sauer had high praise for the Chamber, which she said has defined goals, a strong board of directors and a very capable staff.

Sauer closed again thanking the Chamber board of directors for the opportunity to lead Pike County Chamber forward and to the height of its potential.

“The Chamber and all of Pike County are willing to move forward while cherishing the past, working hard in the present and planning for the future. All of those are the components of success.”