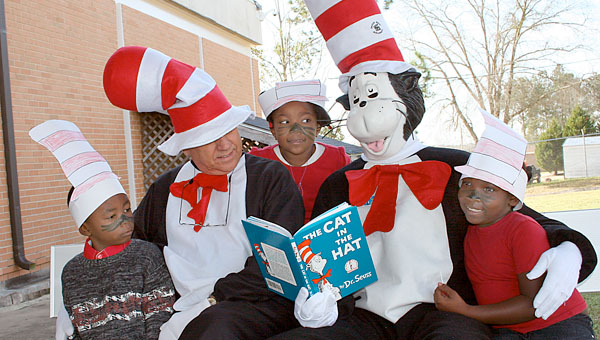 Shanton Redmon, Shania Roberson and J’Myllah McCray joined Jimmy Ramage, president and CEO of First National Bank and The Cat in the Hat as they read Dr. Seuss’ popular book but the same name as “the cat.” Children all across the county celebrated the 107th birthday of Dr. Seuss.

The students at Pike County Elementary School could not even imagine 107 years. For some of them, that number is higher than they can count.

But that didn’t keep them from celebrating Dr. Seuss’ 107th birthday or from enjoying a visit from Dr. Seuss’ Cat in the Hat or stories read to them by Christy Hallstead.

The students gathered in the PCES library to hear stories read to them from several Dr. Seuss books and then celebrated the birthday of their favorite author with a party hosted by First National Bank of Brundidge.

First National Bank of Brundidge was founded in 1904 by Ramage’s grandfather, James T. Ramage, the same year that Dr. Seuss was born.

“The year 1904 was an important year for other reasons, too,” Ramage said. “Henry Ford began assemble line production for the Ford Motor Company and Orville and Wilbur Wright became famous after their historic airplane flight at Kitty Hawk, North Carolina.”

Ramage said that life during the year Dr. Seuss was born was very different from the way life is on his 107th birthday.

“The population of our country was only 74 million and the average life expectancy in the United States was 47 years,” Ramage said. “Only 14 percent of the homes had a bathtub. Most women only washed their hair once a month and used borax or egg yolks for shampoo. Only 8 percent of homes had a telephone. There were only 8,000 cars in the United States and only 144 miles of paved roads. The maximum speed limit in most cities was 10 miles per hour.”

“Sugar cost four cents a pound, eggs were 14 cents a dozen and coffee was 15 cents a pound,” Ramage said. “Ninety percent of our doctors had no college education and most all births took place a home. The leading causes of death were pneumonia, flu and tuberculosis.”

Alabama, Mississippi and Tennessee had more people than California and the population of Las Vegas was 30.

“Back in 1904, two out of every 10 people couldn’t read or write,” Ramage said adding that it was during that year that, arguably, America’s most beloved children’s writer was born. “And, today, 107 years later, we are still reading and enjoying Dr. Seuss’ books and probably will for many more years to come.”