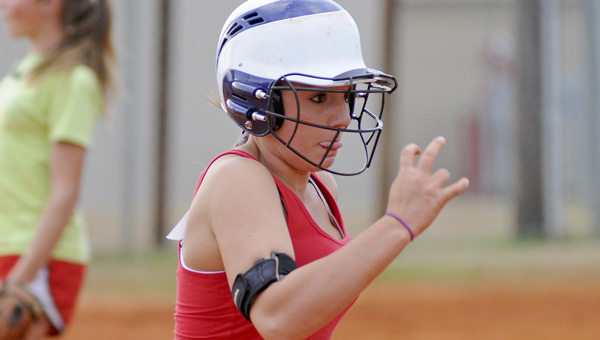 It was a season ago when the Goshen Eagles softball team fell one game short of advancing to the state tournament.

Instead, Horseshoe Bend took second place in the regional tournament, leaving the Eagles left wondering what might have been.

Even though it may have been difficult to overcome that specific loss, Goshen has a chance to redeem itself this season.

And it will be looking to do it with each and every one of its main contributors coming back.

Unlike most teams, the Eagles did not lose any seniors last season, as the team was built around juniors and sophomores.

With those players, the team was able to clinch the area tournament in 2010, and while that is a goal for this season, the Eagles have something grander in mind – reaching the State Tournament.

Leading the charge for the Eagles this season is senior Amanda Griggs.

Earlier this month, the Eagle signed a softball scholarship to Wallace Community College in Dothan.

Since seventh grade, Griggs has been a part of each of the varsity squad’s ups and downs throughout the years.

And to make sure her final season is as successive as she would like it to be, she has a rallying cry for her and the rest of her team.

“I think we learned from last season not to lay off or get a big head. We have to go into each game as hard as possible. That’s the mentality I think everyone on this team has for this season.”

Unfortunately, the season did not kick off the way either Griggs or her teammates had hoped it would.

On the road against Ariton, in the season opener this past Tuesday, the Eagles fell 5-1.

“Our first game was a little rocky, our full team wasn’t there so we were kind of unsure of how we were going to do,” Griggs said. “First game jitters played a factor too.

“But it was good that we got that out of the way. I think our next game, we are going to be ready to go.”

Junior Alli Warrick threw a three-hitter in the opener, however, several Eagle errors proved to be the difference in the end.

“We still should have won that ball game. We gave it to them.”

Last season, three of the Purple Cats’ seven losses came to the Eagles.

“I put (my team) in the fire right away,” Hughes said.

“Ariton finished fourth in the state last year. They are a good team and they came gunning for us.”

Traveling in the beginning parts of the season is something the Eagles, if not already, will have to get used to.

The team’s first home game will not be until March 24, against Catholic.

However, being away from home will not disturb Goshen too much, according to Hughes.

“We have been used to playing on the road over the years,” the coach said.

“We had to travel to face better teams and that makes us better. There are some good teams that we are going to play this season like Catholic and Trinity. Both are at the top of the state in 3A, so that is going to represent some good competition for us.”

But that good competition is going to be met by tough Eagle squad thanks to the aforementioned experience.

“We have a lot of talent on this team. For us to not lose anyone is a good thing,” Griggs said.

“We have been together for a long time. We know what each one of us can do for the team and because of that I think we are going to be a lot better than last season.”

It’s that combination of experience and drive to succeed that has Hughes excited for what could be this season.

But in the end, it’s all up to her players.

“These girls have all played in very competitive games for three year now,” Hughes said.

“But the key to it all is, this team has the talent and ability, they just have to produce and finish. I think in the first game, we lacked intensity. After this loss, the girls have come back to practice a lot more focused – sometimes a loss is a real eye opener.”

The Eagles will be back on the next weekend in a tournament in Troy.