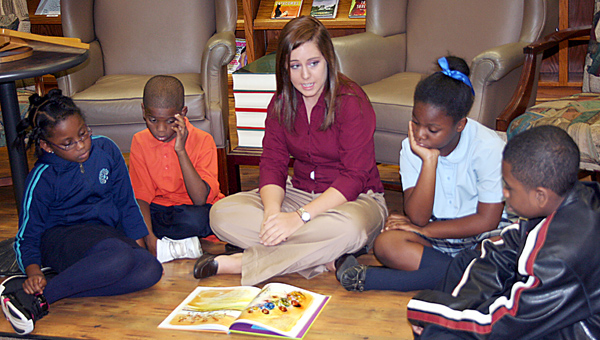 Laura Fletcher’s reading at the African American Read-In was an interactive story. She invited several children in the audience to join her storytelling. (Photo/Jaine Treadwell)

School age children made up most of the audience and the readers tailored their selections to young people.

The African American Read-In was a partnership between Dr. Patricia Waters’ literature class and the Troy Public Library.

“Most of the students in Dr. Waters’ young adult literature class are volunteers with our children’s program,” said Teresa Colvin, children and young adults librarian.

“They work with young people who are struggling with reading and they do an outstanding job. This is a great collaboration between the Troy Public Library and Troy University.”

“There are so many really good African American authors for children, young adults and adults,” she said. “Among my favorites are James Pinkney, Walter Dean Myers, Virginia Hamilton and Mildred Taylor.

“There are just so many and the read-in was a great way to introduce many of them to people of all ages.”

Lindsey Nelson of Prattville was one of the readers and is also a volunteer with the library’s tutorial program.

“All of us who read are in the English Language Arts program and most of us want to teach English on the secondary level,” Nelson said.

“This read-in was an opportunity to share our joy of reading. With so much print now gone digital, it’s important to read from a text-bound book.”

Nelson said each student in Waters’ class was asked to choose eight to 10 books and then to settle on one for the read-in.

“I chose Donald Crews because I had heard of him and, too, he’s a great writer,” she said.

This read-in was a public service component of the Young Adult Literature class and is an event of the 22nd National African American Read-In.