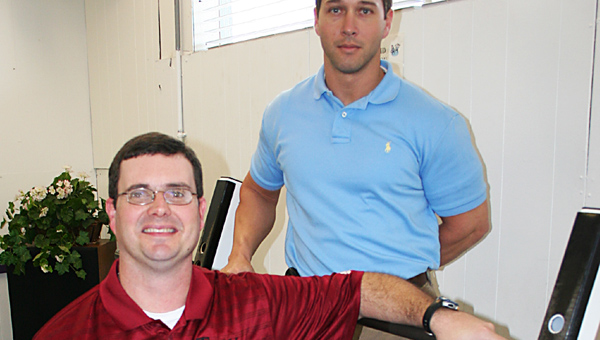 Daniel Jackson of Troy has been working hard in preparation for the regional power-lifting event of the Special Olympics. Jamie Taylor is one of his workout partners. (Photo/Jaine Treadwell)

Daniel Jackson will compete in a preliminary power-lifting event for the Special Olympics on Friday and Saturday in Gulf Shores.

Jackson of Troy is a member of Team Pike County and will represent the team at the regional meet while competing in his specialty, the bench press.

Jamie and Lindsey Taylor have been training with Jackson for the past several weeks as he prepares for the preliminary to the state Special Olympics in May at Troy University.

“To compete in the Special Olympics, some of the athletes have to qualify and qualifying is what Daniel will hope to do this weekend,” Jamie Taylor said. “The Taylors work out with Jackson at Walt’s Gym at 5:30 a.m. and said he arrives motivated and happy.

“Daniel has worked really hard,” Jamie Taylor said. “He is motivated and happy. He’s ready. We expect him to do well.”

Jackson competed in the power-lifting event last year and placed. He hopes to do even better this year.

“I want to bring the gold home to Troy,” Jackson said, with a smile. “I can bench press around 170 pounds here at the gym and I hope I can do more this weekend.”

Jackson has been participating in the Special Olympics since 2007.

“Daniel first participated in track and field events and then decided to compete in weightlifting, which he loves,” said Meredith Welch, head of the Pike County delegation.

Jackson is the oldest member of the Team Pike County. He works at the Waffle House so he’s not a part of a school or center group of special athletes. But his leadership abilities are evident as he works with the other team members.

“Daniel is a competitor,” Welch said. “He is always motivated and enthusiastic and has a wonderful spirit about him. He’s really good with the other kids and motivates them to do their best.”

While Jackson has been a motivating influence on the younger special athletes, he has also been an inspiration to the Taylors.

“Lindsey and I thought, for some reason, that we needed to be involved with the Special Olympics,” Taylor said. “And it’s been a great experience seeing how much these special athletes enjoy competing and the camaraderie of the competition. Even though it seems they have the world stacked against them, they are happy with life.”