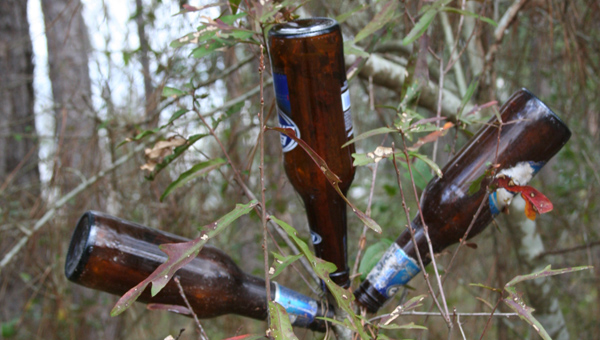 Photos/Jaine Treadwell Bob Dismukes and his fellow residents along Pike county Road 3339 are tired of seeing ‘bottle trees’ along the roadside littered with beer bottles and soda cans. Although he and other residents have clearned some of the litter themselves, they say the county should dor a better job of keeping the roadways clean and litter-free.

If the Guinness Book of World Records includes the most bottle trees in the shortest distance on a county road, surely Pike County Road 3339 holds the record.

In less than one-tenth of a mile, more than 100 beer bottles decorated the roadway. And that didn’t count the bottles that had been removed before the count began.

Cecelia Dismukes, area resident, said litter has long been a problem on the county road but until recently the littler was a random act of thoughtless and careless behavior by tossing litter from a moving vehicle onto the roadside.

“In the last few months, ‘they’ are stopping their vehicles, getting out and decorating trees with beer bottles,” Dismukes said. “The roadside looks like a long row of the bottle trees that are supposed to trap evil spirits. Beer cans, soft drink cans and plastic bags are being hung from trees and bushes. All of this on top of all the litter and County Road 3339 is a disgrace.”

Debbie Hogan also lives on County Road 3339 and said highway litter is a problem, not just on her road, but also all around the county.

“It’s embarrassing for people to drive down this road and see all of the litter and the bottles and bags in the trees,” Hogan said. “The Pike County countryside is beautiful but all you see now is litter. It’s absolutely ridiculous for people to litter like they do. What does litter say about us as Pike County people? As bad as it is to litter, it’s even worse that so few efforts are being made to clean it up.”

Dismukes and Hogan said they do what they can to remove the litter from the roadside near their homes but they are looking to the Pike County Commissioners to help clean up the county.

“It’s part of their job to keep the roadside clean and they need to do their job,” Dismukes said.

Hogan suggested that the county get work crews out on the roadsides.

“There are inmates in the county jail that could be out picking up trash and so could those people that have been given community service hours instead of jail time,” she said.

County Commissioner Ray Goodson said he has been contacted about the litter situation on County Road 3339, which is in his district, District 4.

“I know that litter is a problem all around the county, but I don’t know what we can do about it,” Goodson said. “We don’t have anybody to pick it up.”

Goodson said that he is not in favor of using county inmates to pick up litter on the roadsides.

“When you take prisoners out of the jail, that’s a liability to the county and you have to have insurance,” Goodson said. “Then, too, we wouldn’t have anybody to guard them. I just don’t know what we can do.”

Goodson said the county has video cameras that could be placed at different locations in the county to catch litterbugs in the act. “I think that would have to be done by the sheriff’s department,” he said. “If we catch anybody littering, they could be fined.”

Goodson said that he doesn’t know of anyone in the county who has been fined for littering.

Coffee County is a neighboring county that uses county inmates to pick up litter from the roadsides.

“We use a crew from the state work release program and they are paid,” she said. “And, we also use county inmates who are trustworthy and they are supervised by a correctional officer. We don’t pay them. They are just glad to get out for the day.” Lolley said the inmates from the county jail are covered under the county’s liability insurance policy with the Association of County Commissioners. “Using county inmates has worked for us,” she said. “We’ve not had any problems to speak of.”

Harry Sanders, Pike County administrator, was out of the office Wednesday and unavailable for comment.