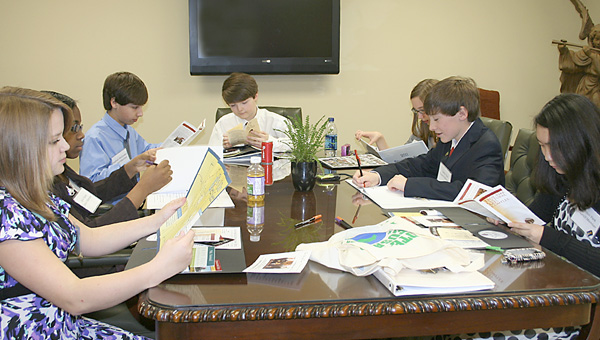 Troy Mayor Jimmy Lunsford and the Troy City Council conceded their seats Tuesday to a group of young people who have shown an interest in their city and in the way that it operates.

The Mayor for a Day is an annual event sponsored by the City of Troy and the young mayor and council are selected from submitted essays.

The Mayor for a Day 2011 was Hayes Lee of Pike Liberal Art School. Katherine Alsup of Covenant Christian School assumed the role of city clerk.

The Mayor for a Day and his council were an enthusiastic, innovative and focused bunch of young “politicians.’

And, they didn’t hesitate to vocalize their ideas to make Troy a better place to live, work and play.

Each member of the governing body had an idea as to what improvements would attract new residents to the area and also expand opportunities for those who call Troy home.

“I’m interested in history and I’d like to see the city do more to preserve historic places,” said Councilmember Ray.

“The cultural arts center is a place that has been preserved and the Rock Building needs to be, too, because of its history. And homes that are historic need to saved.”

Councilmember Guice said the city needs to provide for veterans.

“We need to have places to go for the people that have fought for us,” she said.

City Clerk Alsup suggested that when the Troy Public Library moves to its new location the present library building should be renovated for use as a home for veterans.

“The library would make a good place,” she said.

A state-of-the art humane shelter was the recommendation of Councilmember Gibbons.

Councilmember McQueen had a shelter of a different kind in mind.

“We need to do more about crime,” he said. “We need to put criminals in the newspaper so everybody will know who they are and build a bigger jail for them.”

Councilmember Park said the city needs to have more entertainment for its citizens and attractions for tourists.

“We need more things like shopping malls and movies,” she said.

Alsup said more Greenways are needed and all agreed that the city should find more ways to bring dollars to Troy.

Mayor Lee said a public golf course would be an attraction, as would a putt-putt golf course.

“We need more parks and workout centers,” he said. “And, we need to find ways to create jobs so people will want to come here to work.”

Ray had a suggestion that he said would do many of the things that had been suggested.

“We need to bring back the Walnut Creek project,” he said. “That’s where we would build a big lake and everybody could enjoy it.”

The mayor and council members all liked the idea of a “big lake” and saw many possibilities for it. And, if the Rock Building could be a community center for the arts, history would be preserved and, at the same time, entertainment and learning opportunities would be available to the community. The council members nodded in agreement.

The Mayor for a Day and his council had put in a good day’s work.