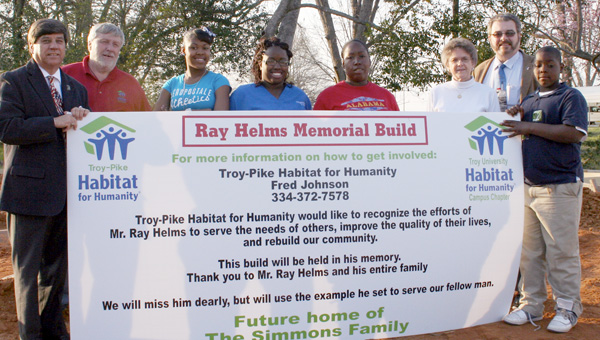 The lot on North Main Street in Brundidge was donated to Troy-Pike Habitat for Humanity by Brundidge United Methodist Church and will be dedicated as the Ray Helms Memorial Build.

“Through Mr. Helms contributions to Habitat, he touched and blessed a lot of lives,” Johnson said. “He was a lifetime member of Brundidge United Methodist Church and we are proud to dedicate this build to his memory. I don’t know enough words to say about the quality of Ray Helms’ life. He set an example that we should all strive to follow.”

Johnson said the 11th Habitat house will be a Blitz Build project on March 17,18 and 19.

“A Blitz Build is the way to go because you get in there and get the job done in a hurry,” he said. “So, it’s easier to get volunteers than if you string the build out over several months and, too, it generates more interest in Habitat.”

The Habitat House will be the home of Teretha Simmons and her three children.

“And, boy, does Teretha have a story to tell,” Johnson said. “She lived in an apartment in the Knox Street area and tells about the time she hid all three of her children in the bathtub to try to keep them for being hit by shots that were being fired in her neighborhood. When the shooting stopped, she went outside and found bullet holes in her car. It was a miracle that one of those bullets didn’t hit her or one of her children. We are proud that she and her children will be our next Habitat family.”

The Blitz Build will “raise” the house and volunteers are needed to do the manual labor.

“You don’t have to have building experience to volunteer with Habitat,” Johnson said.

“If you can follow instructions, you can help. We have a place and something to do for anybody that wants to be a part of building a house for a family in need.”

For more information or to volunteer for the Ray Helms Memorial Build, contact Johnson at info@troypikehabitat.com or 334-372-7578.