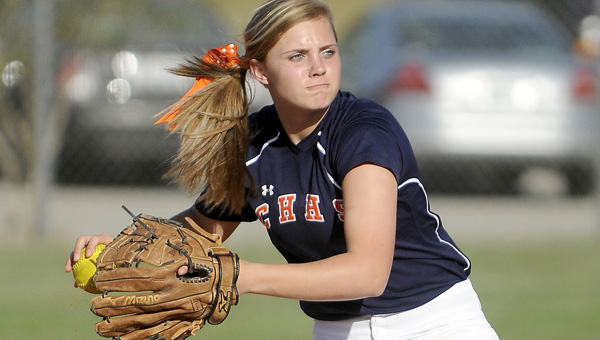 Becca Harltey fields a ball and gets ready to throw to first base. Harltey hit two home runs against Auburn during Monday’s season opening game.

The softball season is in full swing now for Charles Henderson Trojans, thanks to Monday’s season opener.

On Opening Day, the team in orange and blue took on three different opponents and was victorious over each one.

The Trojans defeated Auburn 6-4, Handley, 7-4 and finished off the day with a 7-6 win over Russell County.

The victories were the first for head coach Robin Snyder, who is in his first year with the softball program.

And on Tuesday afternoon, the coach was still happy about what his team was able to accomplish the day before.

Leading the offensive charge for CHHS was Becca Hartley and Victoria Outlaw, who each hit two home runs during the three-game span.

In each of the games, CHHS took early leads, however in the final game, Russell County fought back to take a lead late.

Thanks to a Trojan rally, that lead would not last long.

“We couldn’t have started the season off any better then we did (on Monday),” Snyder said.

“I was proud of the girls. The third game was really the icing on the cake for the kind of adversity we had to play against. We let Russell County back into the game, but our girls did a great job of not giving up and because of that, we got the win.”

Courtney Wood started in the pitcher’s circle against both Auburn and Handley for the Trojans, while Hartley started against Russell County before being relieved by Wood.

“But the defense played great behind me. I was a little nervous in the first game and there were a few times the umps wouldn’t give me some calls but we worked through it all.”

For Hartley, playing at the varsity level is nothing new, since the sophomore has been playing with the Trojans since seventh grade.

In one game, she also matched that total.

“I’m hoping to go past that this year,” she said with a laugh about the homer total.

“I think all the girls and I feel like this is going to be a really good season. We have been anxious to actually play some games. We have seniors that have been through it all and we have people that care about being successful. So we are all pretty excited about this season.”

While the team may be off to a 3-0 start, the road is not going to get any easier for the Trojans.

On Thursday, the team will head to Enterprise for a game, followed by a tournament in Dothan on Friday that will run through the weekend.

“For the most part, we are going to be playing bigger schools (the rest of the week), but that’s what we want,” Snyder said.

“We are not going to get any better if we don’t play tougher competition.”

The Trojans’ first home game of the season will not be until March 10.

“We started off the season last year really well too,” Outlaw said, “and I think we got a little too confident after that.

“The main thing we have to do now is try to stay up and not let things get to our heads. We need to stay tight on defense. I think this team is pretty even on defense and offense, but we are going to work hard and hopefully, we will have some success.”

Like his sophomore outfielder, Snyder knows that even though the season is off to a great start, there is still a lot of work to be done.

“You can’t judge your season on the first three games of the year,” the coach said.

“It’s a long season and I just hope we are able to keep the confidence we played with (on Monday) and keep plying hard.”