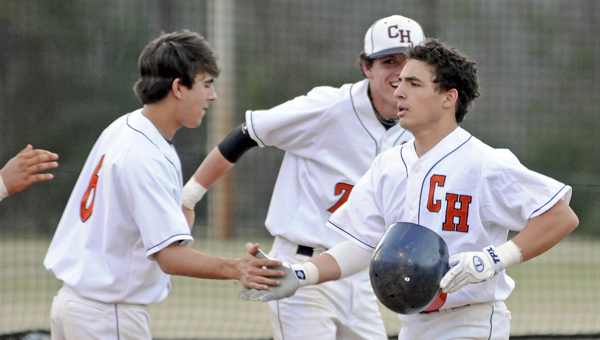 So far, so good for the Charles Henderson Trojans.

In the season opener Monday, the Trojans played host to both Dothan and Greenville.

When it was all said and done, it was the team in orange and blue who was left undefeated, as the Trojans defeated Dothan 6-2 and Greenville 22-4.

“It was a good day,” head coach Derek Irons said.

“We had a lot of guys get their first experience. A lot of firsts under the belt, which is something a lot of guys need. There are some things we have to clean up and fix before the next game, but I am happy with how things went (Monday).”

While it was a bit of a rocky start for the Trojans in the first game of the double header, CHHS would find a way to prevail thanks the stability of starting pitcher Harrison Reeves and the power of shortstop Jalin Lawson.

After retiring the first hitter of the game, Reeves would give up back-to-back hits, allowing Dothan to take the first lead of the day, 1-0.

That lead would hold until the bottom of the third inning.

After going through the batting order one time, the Trojans had just one hit to show for it, thanks to a Michael Fox double.

That was still the case in the third inning, as was the score, until Lawson changed everything.

With Gregory Barnette on second base, after reaching first on an error, Lawson put the Trojans ahead for good, with a home run over the left field wall.

“He threw me that same pitch earlier on and I missed it,” Lawson said after the game.

With the mammoth shot, CHHS grabbed hold of the lead and would add on to it in the same inning when Michael Thomas, who was pinch running for Chase Connell, scored on a pass ball, to put his team ahead, 3-1.

That would be all Reeves would need as the senior would cruise the rest of the way, tossing a complete game, striking out three while giving up five hits and one earned run.

“I feel like I got better as the game went on,” Reeves said. “I started off with some rust and maybe even some butterflies.

“But I expected that. I was lucky to get out of the first giving up just a run. The defense played great behind me the whole game – they got me out of some key situations.

Lawson finished the first game 2-3, with a four RBIs, two on the homer and another two in the fourth inning off of a bases loaded single.

Tyler Dansby would bring in the last run of the game for CHHS, on an RBI double, scoring Reeves.

The night capper of the double header was a completely different game in and of itself.

Even though the Trojans again found themselves down 1-0 going into the bottom of the first, the team was quick to erase that early deficit.

Of the 12 CHHS batters in the inning, nine reached base by either a hit, a walk or an error.

And all nine scored.

Joey Denison, Michael Fox and Tyler Dansby all drew bases loaded walks for RBIs, Chase Smartt hit an RBI single and Barnette capped things off with his first career Grand Slam to get things going for the Trojans.

An inning later, the Trojan bats were still hot.

Connell would lead things off with a standup double, and again would be relived by Thomas. Denison would bring in Thomas after an error, and in just his fifth varsity at bat, Smartt would smack his first career home run over the left field wall to put CHHS up 12-1.

A two run triple by Tripp Blackmon would put the Trojans up 14-1. In the second inning alone, CHHS nearly topped itself from the inning before it, scoring eight runs to go up 17-1.

The Trojans would tack on five more runs in the final two innings to go up 22-4, after getting RBIs from Denison, Thomas, Brantley LeCroy and Lawson.

“I thought we were picky at the plate,” Irons said. “We got some good pitches to hit.

“I felt like on the day, after the third inning of game one, the rest of the day we hit well. Everyone says hitting is contagious. I thought we got focused in and we were able to string some quality at bats together and that made all the difference.”

Lost in the offensive explosion was a solid outing by Blake Hutchinson, who started on the mound.

The senior threw three innings, striking out six while giving up two runs off of four hits.

Houston Mabray would pitch the final two innings, striking out three while giving up one earned run off of three hits.

“Blake gave us a chance, he stayed ahead in the count a lot,” Irons said.

“Certainly not bad for his first day.”

As for the day itself, every Trojan that batted reached base safely at some point.

CHHS finished with a combined 28 runs scored in 11 innings, with 23 hits, including three home runs and 13 different players recording RBIs.

“I was kind of nervous (during the first game),” Smartt said.

“But my dad (Troy University assistant coach Mark Smartt) talked to me and said to calm down and do the best I can. When I hit that home run the only thing I could think was ‘Thank you!’”

While starting the season off with two wins is always good, Irons said having the opportunity to play all of his players, especially the young ones, was an added bonus.

“We know our young guys can play, and they know they can play,” Irons said.

“But there is something about getting that first hit under your belt, or first time on the mound under you belt. Understanding of what that feels like and having success. That’s good that everyone was able to do that and get it out of the way. We can just go play baseball.”