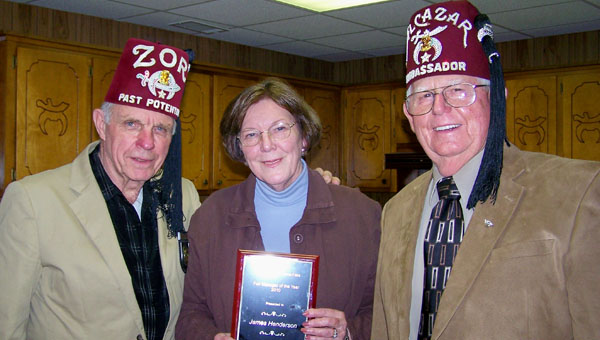 James Henderson of Troy has been named the 2011 Fair Manager of the Year by the Association of Alabama Fairs.

Henderson has been an active fair manager for the Pike County Fair for 13 years and a member of the sponsoring Pike County Shrine Club for 37 years.

“This is a great honor for James and for the Pike County Fair,” said Freddie Turner, Shrine Club member. “James always does an outstanding job. He is very deserving of the honor and we congratulate him.”

Henderson was quick to turn the attention away from him and toward those he said are the backbone of the annual Pike County Fair.

“This award is a great honor and I accepted it on behalf of the Pike County Fair Association,” Henderson said. “The award is presented for really hard work and we have some of the most dedicated and hard working people I know. The Pike County Fair has been very competitive for years and we’ve graded high. We’ve been able to hold a rating of excellent since 2000. And this is all due to the great support of our Shriners and our ladies auxiliary. Without their support this award would never have happened.”

Henderson said all of those associated with the Pike County Fair Association have a strong commitment to children.

“The Shriners have one of the largest burn centers in the country and we are always reaching out to children in need,” he said. “We are dedicated to that purpose.”

The Pike County Fair offers free pass to school children on Wednesday and Saturday nights so that more children are able to attend.

And Henderson is personally dedicated to making the Pike County Fair the best it can be. He orchestrates all of the fair activities including the musical programs, youth bands, dance teams, singers and clowns. He conducts the sales and registrations of the commercial booths and the registration of non-commercial booths.

“Our local government and law enforcement agencies participate in the Pike County Fair in an effort to improve the health and safety of our community,” Henderson said. “We also have participation from our political parties.”

The 2010 fair improved its concession area by adding drinking fountains and benches.

“Another improvement we made was in the livestock area,” Henderson said. “We made it so that children could pet and feed the small animals and, after the fair was over, people were able to buy the rabbits and chickens and that worked really well.”

Other than managing the Pike County Fair, Henderson is active in church programs and activities at Southside Baptist Church were he is a member of the choir, director of the RA program and president of the men’s ministry.

Henderson was manager of the Troy Americans baseball team of the Pro-Am League for 12 years and the team won 10 championships during that time.

He was commissioner of the League for three years.