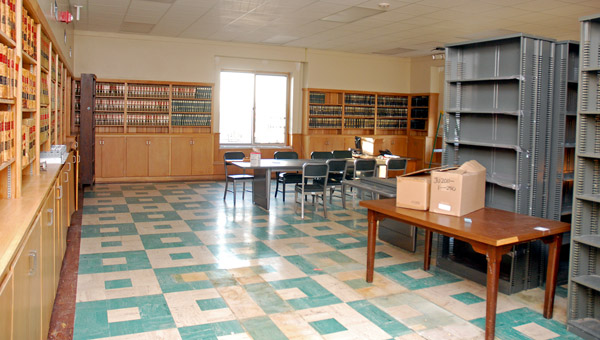 The old law library at the Pike County Courthouse is being converted into another much-needed courtroom.

Renovations are being made to an old law library on the second floor of the courthouse to convert the room into a brand new courtroom.

Jamie Scarbrough, Circuit Clerk for the Pike County Courthouse, explained the need for the renovations.

“Since 1953, when the courthouse was built, we had two courtrooms: the main courtroom and the upstairs courtroom, what we call the Grand Jury courtroom, and we had one judge at that time,” Scarbrough said. “But, now, we have three circuit judges, one district judge and, soon, we’ll have a ‘drug court’ judge.”

Scarbrough says that space is an issue and the renovations are a welcomed relief in an effort to utilize space they already have.

Scarbrough said there have been times when the two courtrooms have been in use and the only way to suit the needs of the other judges was to put them in other rooms.

“We are pretty much busting at the seams here,” Scarbrough said.

The renovations will allow for the old law library to be turned into the courthouse’s third fully functional courtroom where, according to Scarbrough, judges will be able to have jury trials.

“We used to have small bench trials, where we would just bring the parties in, and the judge would come in, have a seat at the table and have a hearing in the law library,” Scarbrough said. “But, now, we’re actually going to be capable of having a jury trial in here.”

With five judges and only two courtrooms, practicing law can become somewhat congested.

Scarbrough said the judges have allocated funding for the renovations from a Law Library fund that has been set up in conjunction with donations from the Bar Association, the county and the District Attorney’s office.

“This is something we all know that we need very bad, so we’re doing whatever we have to do,” Scarbrough said. “The attorney’s, the district attorney and the judges were all trying to get together and come up with something that we can do.”

Scarbrough says the old law library will have the walls painted and will have new floors laid, along with having new benches and a new judge’s bench.

Scarbrough said anytime you can utilize the space you already have in order to get the maximum amount of use out of it is always a good thing.

Scarbrough says the books in the law library have been updated online and are available there and, because of that, there isn’t any need to keep the obsolete outdated books.

“We’re real excited about it,” Scarbrough said. “It’s going to look completely different than it does now.”

As far as the timeline for the completion of the renovations is concerned, Scarbrough says that the jury is still out.