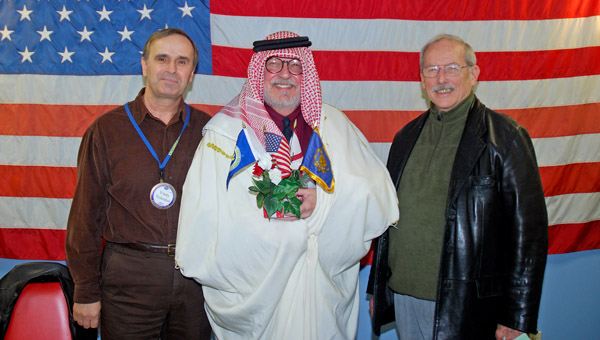 Dr. Ed Merkel recently shared insights from his teaching trip to Saudi Arabia with members of the Troy Exchange Club.

The American Legion received a healthy dose of culture on Feb. 3 as Dr. Edward T. Merkel shared insights from his recent trip to Saudi Arabia.

Merkel, director of graduate business programs and professor of economics, traveled to Jubail, Saudi Arabia, with his wife. There, he taught Saudi students at the Al-Jubail Industrial College and had a profoundly pleasant experience.

“My wife and I perceived no ill will or negative feelings towards us as individuals, or the U.S. in general, by anyone we met while there,” Merkel said.

“In fact, my students stressed the fact that the Saudis viewed America as a geopolitical friend and ally, and a sound economic partner. We found this pleasantly surprising, which belies the perceived animosity of the Saudis that most Americans fear.”

Merkel said the modern classroom facilities at the college, the students’ willingness to learn and their profound mathematical skills were among the most refreshing aspects of the trip.

“We also enjoyed the excellent Arabic food, in particular the rice dishes and desserts laden in honey and rose-water, and the sincere friendliness and hospitality of all we met,” Merkel said.

“Public programs such as the building of roads, the construction of schools, the provision of all healthcare, and public education is funded by the sale of crude oil by the Saudi government, which owns all the nation’s oil deposits,” Merkel said.

“The flow of income generated by the sale of oil more than covers the state expense of public programs, thus no taxes are needed or imposed.”

Merkel says that the Saudis, adhering to the five pillars of Islam, take one of these pillars very seriously.

“Saudis engage in charity by voluntarily donating 2 percent of income annually to the poor through government channels,” Merkel said.

“This is called ‘zakat’ in Arabic and, according to my students, virtually all middle and upper class income earners in Saudi Arabia willingly practice this.”

Merkel, dressed in a “Schmag” (Arabic for the head piece) and a “thobe” (Arabic for the commonly worn robe), spoke of the importance of adhering to local Saudi customs and dress codes especially for his wife who, according to him, was more than willing to wear the “abaya” (all black dress for women).

“We adhered to the saying, ‘when in Rome do as the Romans,’ so when is Saudi Arabia do as the Saudis,” Merkel said. “If one does not want to adhere to the customs of the country being visited, then one should not visit the country.”