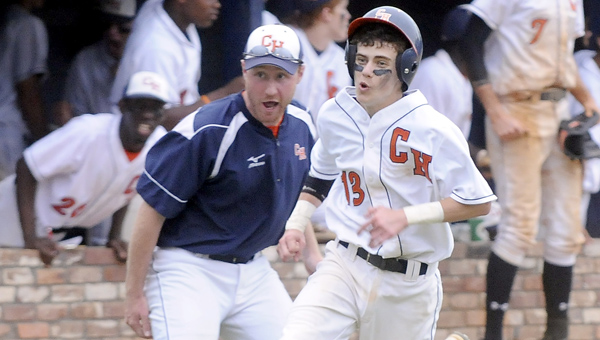 Charles Henderson High School's Michael Fox rounds third enroute to home as the go-ahead run during the Trojans' first game of a double-header against Rehobeth High School in the second round of the AHSAA playoffs, in Troy, Alabama, on Friday, April 23, 2010. (Messenger Staff Photo/Thomas Graning)

As the sun set Friday afternoon, so to did the preseason for the Charles Henderson baseball team.

For the past two weeks or so, the Trojans have been hard at work to get as best prepared for opening day as possible, whether it was in the batting cage or on the field.

But, the time for preparation has passed.

Now, the only thing left to do is play ball.

On Monday morning, the Trojans will get that opportunity as regular season play will begin against the very same opponent is started the season with last year, the Dothan Tigers.

In 2010, the two teams split the opening day doubleheader.

That was the last time either has played one another and with the amount of change that can take place in a year’s time, planning for Dothan could be somewhat tricky, according to head coach Derek Irons.

“We have played them a few times in the past couple of years and it has always been tough games,” the coach said.

“They get after it and play hard. But it is kind of hard to know what to expect. There is no real scouting report to go off of (right now). We played them so early in last year that whatever plan we had last year is going to have to be different. We will be going in it kind of blind, but (Dothan) will be doing the same thing for us.”

In the second game of the day, the Trojans will be taking on another Tiger team in Greenville.

While both teams will present problems along the way for CHHS, there is another team that Irons is more concerned with going in – his own.

“You always are more worried with yourself then you are with the other teams,” the head coach said.

“All we really can do is worry about us and make sure we are doing everything we can do both individually and as a collective group and hope that’s enough.”

Harrison Reeves will likely get the start against Dothan, leaving fellow senior Blake Hutchinson in line to get the start in game two.

Like some of his teammates have said earlier in the week, Hutchinson believes his team is going to be strong at the plate among other areas.

“I think we look pretty solid, especially with our bats,” the pitcher said.

“I think we are going to be as good as we were last year. I think our pitching is also going to be a surprise with a lot of the young guys coming up and playing well.”

As far as the lineup goes, the Trojans will have one more light practice today before the game.

It’s after that practice that Irons and the rest of his staff will get together and decide who will be where on the field and in the lineup come Monday.

“We will sit down as a coaching staff and try to evaluate things as best we can,” he said.

“We want to be at our best in April and if we are going to have our growing pains, we want to have them now. We are going to make the best decisions we have with the information we have. That information is probably going to change every week with injuries and other things like that. But we will try to put something together by (today) and go out and compete and play hard on Monday.”

With the beginning of every season, all players will have to play with some level of nerves.

Some more than others, but to make sure those nerves don’t pose too much of a problem for the Trojans, Irons explained he is going to try to keep everything as normal as possible with the first two games.

“Routine is going to be one of the biggest things going into Monday,” he said.

“We have to make sure we go through the same routine that we usually do. Hopefully, that will build some familiarity because no doubt there are going to be some nerves and butterflies. But that’s what makes opening day so great, everyone is undefeated and we are going to have some great weather. Nerves are going to be a part of it, but I think these guys can handle them.”

CHHS will open the season up with Dothan at 11 a.m. followed by Greenville at 3 p.m.