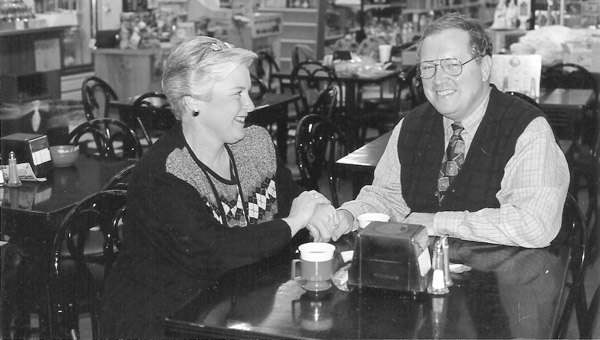 Evelyn and Joe Watson know the tradition and history surrounding Byrd's Drugs, which they have run together for 42 years.

On Valentine’s Day 42 years ago, Joe and Evelyn Byrd Watson purchased Byrd Drug Company and continued the “drug store legacy” that began on the Square in Troy in the mid 1800s. Byrd Drug Company as been a business icon on the square for 70 years and is a place of destination for those who want to “come home again.”

“We have many customers who have moved away and come to back to Byrd’s with their families,” Evelyn Watson said. “We’ll hear them say, ‘This is the place I told you about.’ They’ll usually get a chicken salad sandwich and a chocolate milkshake.”

Coming back to Byrd’s is like coming home for many people who have called Troy and Pike County home. At 70 years and counting, there are few people who remember a time when Byrd’s was not “on the corner.”

“My daddy, Marvin Byrd, came to Troy to work for Sam Williams in 1926,” Watson said. “He had worked in a drugstore in Mobile as a youth and became interested in pharmacy.”

Byrd graduated from Struby’s School of Pharmacy in Macon, Ga., at age 23. He worked for Williams and then Herbert McLeod lured him away.

“It was during this time that Daddy met my mother Frances Gulledge from Verbena,” Watson said. “She had come to Troy to teach at Troy High School. They got married in 1935.”

In July 1940, Marvin and Frances Byrd opened Byrd Drug Company on what was then Hollan’s Corner, named for J.W. Hollan who came from Elba to Troy in 1878 to work as a salesman for Dr. A. St. Clair Tennille, who had a drug store on the north side of the square.

After five years of learning the ropes with Tennille, Hollan opened his own store on the south side of the square.

“Hollan developed some of his own medicines … one of which was Hollan’s Tablets which he promised would quickly relieve neuralgia, headache, and rheumatism,” Watson said. “Drugstores sold everything imaginable. In 1894, Hollan advertised window glass for those people that were building homes as well as sets of genuine pearls. In 1895, he added Hollan’s Diarrhea Remedy to his line of special drugs.”

Hollan gained exclusive rights to manufacture and sell the famous Tennille’s Pills in 1896 but lost it to Sam Williams in 1900.

Hollan’s business flourished for the next several years and his son, W.L. Hollan, worked in the store. They had several doctors with offices in their store on the north side of the square in A. St. Clair Tennille’s building.

After several parnerships, J.W. Hollan’s drug store settled in on the north east corner of the square around 1898.

In 1904, at the age of 52, Hollan reorganized his store and brought in his 20-year-old son, Will and his son-in-law, M.A. Ellison as partners. The new firm was known as Hollan-Ellison Drug Company.

“In 1915 Will Hollan purchased the beautiful soda fountain of the C.B. Goldthwaite Pharmacy which had just closed,” Watson said. Since Hollan was not a pharmacist, he had to hire them. Delivery service was provided by all the drugstores so they got together on the rules: One free delivery each day at 4 p.m., all special deliveries cost five cents and all stores closed at 9 p.m. except on Saturday.”

The drug stores that agreed with this plan in 1918 were Sam Williams, Herbert McLeod, W.L. Hollan, A.L. Crouch, and Walter Walters.

Walter Walters graduated from Auburn’s School of Pharmacy in 1906 and worked several years for Sam Williams. Then he went into business for himself when he bought Folmar Drugs in1916. It became Johnston Brothers in 1920 and Walters worked for them.

“But he wanted his own store again and on Hollan’s Corner. Walters purchased the drug business of W.L. Hollan in 1923 but did not make a go of it for the second time,” Waston said. “Walter Walters was mayor of Troy in 1932 and his energies were diverted during this period of time. Will Hollan reluctantly had to take back the drug store. Hollan’s Corner reopened in June 1932 on a strictly cash basis.”

With young Marvin Byrd, behind the counter, history was in the making. No one had any idea that it would be Byrd would would create a “drug store legacy” in Troy that would be carried on by his daughter and son-in-law.

Marvin and Frances Byrd worked as a team to make Byrd Drug a success. She made the chicken salad and pimento cheese and he ran the pharmacy.

“I remember we had chicken in a pen in our backyard on Walnut Street,” Watson said. “Talk about fresh chicken salad.”

Watson said her dad was a fine, hard-working man with an incredible work ethic. “Daddy loved people,” Watson said. “He was open six-and-a-half days a week and rarely took a vacation.” All four of the Byrd daughters grew up working in the drug store. “I should say drug stores,” Watson said. “In 1945, Daddy opened a second store, Byrd Watters, on North 3 Notch in the Masonic Building. It had been the Princess Theater. Later the teenage canteen was on the second floor. He owned two stores for fifteen years and sold Byrd Watters, which is now Synco Drugstore, in 1960.”

Watson said that Byrd was a good man to work for and his employees stayed with him for many, many years. “The soda fountain served wonderful hot vegetable lunches as well as our now famous chicken salad sandwiches and homemade potato salad, ice cream sodas, milkshakes, and banana splits,” Watson said.

Joe and Evelyn Watson met at Auburn University in 1963. “During breaks, I worked with Daddy at Byrd Drug and Joe often visited me at the drug store,” Evelyn Waston said. “Joe was drawn to the friendly atmosphere and charm of an old fashioned drugstore. He was there so much Daddy soon put him to work. He demonstrated how important a strong work ethic and friendly service were important to customers He was there to serve them. Joe was so impressed that by the fall of 1964 he changed his major to pharmacy.”

From that time on Joe and Evelyn worked every holiday break and summer at Byrd Drugs. They married in 1968. “It was during Joe’s final internship at Byrd Drug that Daddy died of a heart attack and Joe had the unexpected opportunity to buy the drug store from the family,” Watson said. “On Feb. 14, 1968, at age 24, Joe and I purchased Byrd Drug Company.

“In 1969 we bought the building from the Hollans. We have now owned the store 42 years. And it has been in the same family, the same location, with the same name for 70 years. Most of our employees work wih us from 15 to 40 years or until they retire. Many of our customers have been with us for 40 years or more.

“Marvin Byrd, J.W. Hollan, Will Hollan and Walter Walters would be proud,” Watson said. “I know Joe and I are.”