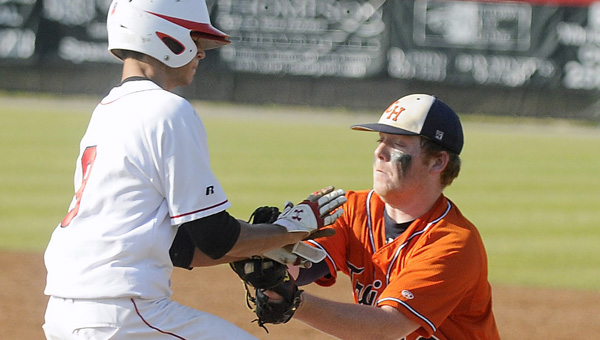 While the faces and names at Frazier Field change on a yearly basis, there is one aspect of how the baseball played there that will not – the philosophy.

Since Derek Irons took over as head coach several years ago, the Charles Henderson Trojans made focused on their pitching and defense first and foremost. And even the team is faced with a different looking lineup then it had from a season ago, the coach said his players are quickly learning what is most important on the diamond.

“I think we always try to make our main strength pitching and defense,” Irons said.

“We tend to want to be aggressive on the mound, throwing strikes, not being afraid of contact and making plays defensively. We have really emphasized defense in our practices and the guys have responded.”

In the Trojan infield, there will be three returning starters, Chase Connell at catcher, Dalton Harris at first base and Jalin Lawson, who will be making the switch for third to shortstop. And in Iron’s mind, it will be Connell who leads the way, defensively.

“I think our biggest strength is going to be behind the plate with Chase,” Irons said.

“Chase played a virtually every game last year and he’s one of the few guys that will be back in the same position and role. He is going to need to be kind of an anchor for us.”

As far as how the pitching will go, the coach said seniors Harrison Reeves and Blake Hutchinson are going to have to come up big, especially early on in the season.

“Harrison and Blake both pitched some very meaningful innings last year for us, especially in the playoffs, so they should have experience there, in terms of a strength for us.”

For any team to be successful in baseball, a team’s offense is an important factor.

And while Irons has said he has happy with the amount of time the Trojans had in the batting cages this offseason, it is a part of the game that he does not want to be reliant on.

“The reality is, hitting comes and goes sometimes. We are going to play 40 to 45 games and some days, we are not going to hit as well. If we are pitching and playing defense in those games, we still have a chance and don’t have to rely on scoring seven or eight runs a game to stay in it.

“Hopefully, we will be the kind of team that can score runs if we need to but can also win 4-3 type games.”