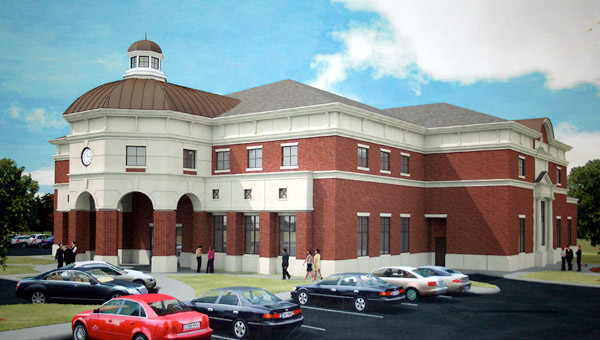 An artist's rendering shows the future Troy Public Library. Some external features have been adjusted to bring the project into budget.

The long awaited and much anticipated new Troy Public Library is edging ever closer to reality.

William White, library director, said he is awaiting the final estimate on the library project before submitting it to Mayor Jimmy Lunsford and the City Council to begin the approval process.

“The project is on budget and we should soon go to bid,” White said.

However, before the project could be approved and bid, several changes had to be made to bring the project on budget.

White said the recent slight upswing in the economy caused the price of steel and iron to skyrocket and changes had to be made in the project to keep it within the $4 million budget allotment.

“The change from the original plan that will be immediately noticeable is in the Walnut Street façade,” White said. “It had to be changed to lower the cost of the project. The original plan called for a octagonal façade and it was changed to a gable which gives the library a more traditional look that, I think, will compliment the city’s design rather than stand apart from it.”

White said the new library design will have more of a stereotypical historical library/ schoolhouse look.

The Elm Street entrance of the library will be reminiscent of the old Troy High School.

“The front door unit of the old schoolhouse has been incorporated into the design,” White said. “If you take an old post card photograph of Troy High School and put it next to the Elm Street entrance design, they are very close to the same.”

Several other changes were made to bring the project on budget.

“These changes had to do with things like reducing the number of light fixtures but they were not changes that anyone would know or recognize,” White said.

The new Troy Public Library will be a 24,000-square-foot structure with a meeting room that will accommodate 140, an expanded children’s area with its own storytime room, a genealogy department, an Internet area that will double the present number of computer stations and adequate parking.

“We will also have an amphitheater on the Elm Street side of the building and lighted sidewalks and seating areas on the Academy Street side,” White said. “The new library has been designed so that it will be as effective and efficient in 20 years as it is today.”

White said the library project is moving along at a quick but careful pace.

“We don’t want to make a small mistake that could send the project over budget,” he said. “The new library is very important. Right now, we are registering 1,000 new patrons each year. The need for a library is greater than ever and it will continue to grow as more people realize all that our library has to offer.”