Trojans happy to be on field 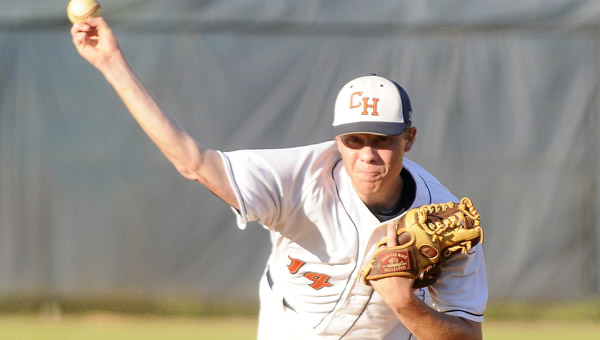 During the first couple of days of practice, the only things hitting the surface of Frazier Field were raindrops.

Thanks to a combination of heavy rain, wind and freezing temperatures, it may have been tough for anyone looking to watch the Charles Henderson baseball team at practice during the first couple of days, simply because, there was no practice.

For the first full week, the Trojans were inside warming up their arms and taking cuts inside the batting cage.

“We are very blessed with the facilities we have and to be able to something (during bad weather),” CHHS coach Derek Irons.

“That being said, it’s not the same as being outside on the field. There is so much you can’t duplicate indoors. We got a lot of good hitting time in, but we were behind the curve early defensively.”

However, thanks to a dramatic change in the weather the past week or so, the last place you will find a baseball player between the hours of 3 p.m. and 6 p.m. is indoors.

With the Trojans’ first two games of the season coming up on Monday, the time for catching up on where the team needs to be defensively is now.

So far, so good, according to Irons.

And while the coach said he has noticed positive attitudes through both good and bad weather, there is one factor that played a major role – the team’s seniors.

“We talk a lot about adversity and controlling the things we can control,” Irons said.

“Our first couple of practices were indoors, because of something we can’t control. But I thought our team had a pretty good attitude through that time, and that is a direct reflection on our seniors. They are kind of the default leadership. Those guys had good attitudes about it, and because of that, a lot of the other guys did too. We were able to be productive the first couple of practices even though it wasn’t what we wanted.”

Only Meredith was not on last year’s team, as he did not play.

For the other four, each will be in familiar positions.

Both Hutchinson and Reeves will be on the mound, as well as third and first, Connell will be behind the plate and Dansby in the outfield.

Last season, Reeves pitched the second most innings on the team with 64, while Hutchinson, mostly in relief, had the fourth most innings, with 45.33.

Reeves finished with a perfect 9-0 record, recording 32 strikeouts and an ERA of 3.50.

Hutchinson led the team in saves with four and in ERA with 1.24.

In the team’s first game of Monday’s double-header against Dothan and Greenville, Reeves will more than likely get the start against the Tigers.

And with just five days to go until first pitch, the senior said he is ready.

“It feels awesome to be back on the field,” Reeves said.

“I’m feeling good, my arm feels good. I am eager to get out there Monday and start playing. I have butterflies already. I have been ready to play since Spanish Fort put us out (last May).”

Making sure both pitchers hit their spots, will be Connell, who will be starting his second full season as the Trojan catcher.

While Connell caught one of the best pitching rotations during his junior year behind the plate, he also did a lot of damage while at it.

He also hit four home runs, two of which came in the postseason.

Even though the weather may have handicapped the Trojans the first week of the season, the senior believes this season’s team is going to be better at the plate because of it.

“We are going to be good, I believe,” Connell said.

The Trojans will open the season at Frazier Field, Monday morning at 11 a.m. against Dothan.

The team will be back in action later that day, facing off against Greenville. That game has a first pitch is set for 3 p.m.