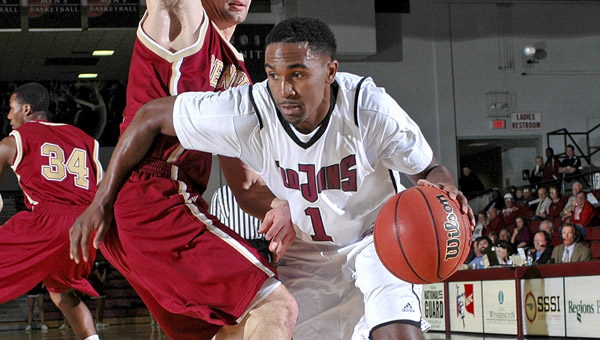 For the past three seasons, the Denver Pioneers have made the cross-country trip to Sartain Hall.

Each time, it was the Troy Trojans who came away victorious.

And even though the Pioneers are currently leading the Sun Belt Conference West Division, while the Trojans are fighting to get back to .500 in the conference, the result was the same as it has been when the two teams meet up in Troy.

Thanks to a dominant defensive performance and patient play on offense, the Trojans were able to overpower Denver, going on to a 64-55 win Saturday night.

“In a low scoring game like this, the kind of performance we had collectively (Saturday night) from our guys is what we have to have to win,” head coach Don Maestri said.

“We are not the most talented team in the conference, but when they really play well together and follow (the coach’s plan) as well as they did against Denver, that gives them a chance to succeed.”

The victory was Troy’s second in-a-row, after the team took down South Alabama on the road Thursday night. In doing so, Troy improved its record to 7-17 overall and 5-7 in conference play.

Even though the Trojans hit a season-low three 3-pointers, the team excelled at the free throw line as well as defensively, as the Trojans allowed a season-low 55 points to an opponent and shot 81 percent from the line.

A big part of the Trojans’ success at the charity stripe came from the current NCAA leader in consecutive free throws made, guard Vernon Taylor. Despite missing the final 12 minutes of Thursday night’s win, Taylor was in the starting lineup and hit all six of his free throws, bringing his streak to 30-straight.

He also finished with 18 points in 34 minutes.

“For me, I’m not really a shooter,” Taylor said, “my specialty is to drive the lane.

“Coach told us to bring our driver’s license to the game. He said to drive the ball as much as possible, and that’s what I did. And I think that played to our advantage. That’s what we had to do (Saturday).”

While Troy flourished shooting the ball, the visiting Pioneers did not.

Denver shot just 39 percent from the floor, and while they hit 10 3-pointers, they missed 19, for a 36.7 shooting percentage.

The largest lead the Pioneers had was five points, which was late in the first half.

The Trojans would not panic, however. While the game was tied at 27-27 at halftime, Troy continued to stay patient on offense, while giving Denver a hard time finding any kind of a groove. With less than nine minutes to play in the game, Troy went on a 13-4 run, which all but sealed the victory.

“Denver is going to keep you on defense for a long time,” Maestri said.

“You can’t get over anxious when you play Denver. You have to accept the fact that you are going to be on defense for a long period of time. Sometimes that affects you offensive. But I thought our kids made a great adjustment, mentally, on offense by not rushing and by waiting to get some good drives in the game.”

Another key for the Trojans was the play of sophomore guard, Will Weathers.

In 40 minutes, Weathers finished with a game high, 19 points and 10 rebounds.

“I think in the South Alabama game, we didn’t go on any droughts and we carried that momentum into (the Denver game),” Weathers said. “We kept our heads up, we kept going hard and played good defense. I think that’s what started it for us, we played good defense. That’s why we pulled away. They couldn’t hit shots and we played a lot more aggressive than usual.”

Troy will be back in action on Thursday night, playing host to Middle Tennessee, with a tip-off scheduled for 7:30 p.m.