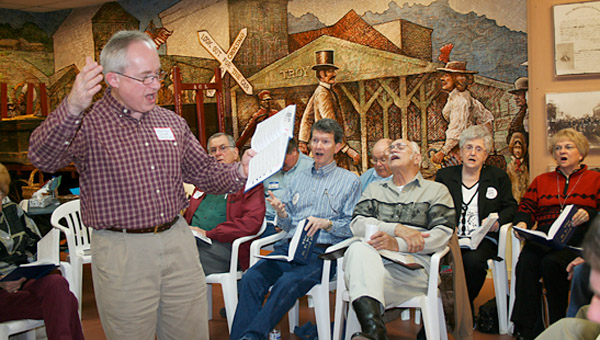 More than 70 people attended the Sacred Harp singing at the Pioneer Museum of Alabama on Saturday.

Sacred Harp singing has gone hi-tech and is gaining in popularity all across the country. But there was nothing hi-tech about the Sacred Harp Singing at the Pioneer Museum of Alabama on Saturday. It was simply a gathering of singers who love the shout-it-out style of singing the hymns that have been handed down through the generations.

About 70 singers from the Wiregrass and River regions and the Florida Panhandle sang their hearts out from 10 a.m. until 3 p.m.

And, that kind of explains why people often miss-speak Sacred Harp – because it is singing that comes from the heart, thus Sacred “Heart.”

Rhonda Flowers of Troy attended a Sacred Harp Singing for the first time in about 30 years.

“As a child, I would go with my grandparents to Sacred Harp singings at Mount Moriah,” Flowers said. “I went Saturday for two reasons – I went to experience a childhood memory and I also went because my son-in-law, Ken Kelley of Pleasant Home, was singing.”

Kelley said he is carrying on a family tradition of Sacred Harp singing.

“I want to pass the traditions of my dad and my granddad on to my children,” he said. “It’s important to me that my children know about their heritage.”

Flowers said Sacred Harp singing is roots music and the singing that she heard on Saturday was no different from the singing she remembered from her childhood.

“Sacred Harp singing really hasn’t changed,” she said. “It’s called primitive, from the Primitive Baptists, but you have to be very talented to sing it. I’m a trained musician and I can’t do it. It takes a certain level of talent – and to sing without music is amazing.”

Several Troy University students attended the singing and Kelley said more students are expected at the next singing.

“There are websites dedicated to Sacred Harp singing and it’s rising in popularity,” he said. “It’s good to see it making a comeback.”

Wynnette Fryer, a Brundidge native who now calls the Chicago area home, was back home visiting and attended a Sacred Harp singing for the first time. She was interested to learn that Chicago is now a hotbed for Sacred Harp singing. “Really, I enjoyed it,” she said. “I didn’t have any idea what to expect. But, you have to hear Sacred Harp singing to have an appreciation of it and to understand it better. Nobody can explain it to you. It was interesting and enjoyable.”

Fryer said she was amazed at the number of men who participated.

Although she was not familiar with many of the songs, she appreciated the enthusiasm of the singers and knows for sure that Sacred Harp singing is not something that she could do without many, many hours of listening, study and practice.

“I couldn’t get my fa’s and la’s in the right places,” she said, laughing. “But I understand Sacred Harp singing much better now and really appreciate it as a part of our heritage. I really do.”