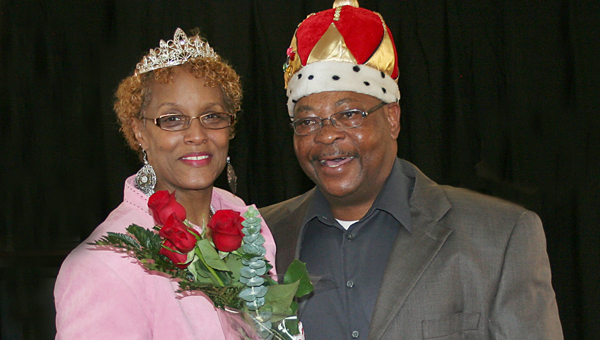 Cupid was zinging arrows everywhere in Pike County Friday and, strangely or maybe purposefully, the arrows were finding their marks at places were hearts were young and love was all around.

The Lillian D. Green Nutrition Center in Troy and Troy Health & Rehabilitation Center crowned their Valentine kings and queens who will reign supreme througout the year.

Samuel and Deidra Adams were chosen by popular vote of the Center’s participants and their reign is expected to be filled with joy and happiness.

The Valentine King and Queen have been married for 13 years but they “laid eyes on each other” for the first time at a funeral.

“At a funeral, you’re not supposed to be looking around but I saw him looking at me when I was looking at him,” Deidra said, laughing. 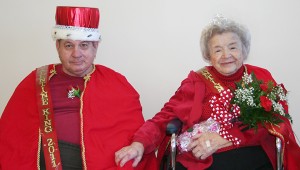 Samuel admitted that he was looking at Deidra first because she was “good-looking.”

Whether they remember anything about the funeral other than each other, the couple didn’t say. They just said it was the beginning of a beautiful, loving relationship.

“I went after her,” Samuel said with a smile.

And, that’s the way any courtship would be, the Valentine Queen said. “That’s what the young girls should know. You sit back and wait for him to come after you. Don’t go running after him. If the man comes to you, he’ll treasure you. So, just wait. Let him come.”

Neither Samuel nor Deidra has worn a crown before so the experience is the first for both of them.

And they said it is an experience that they are proud and honored to share.

“I’m sitting on the top of the world,” the Valentine King said.

“And, I’m up there with him,” the Valentine Queen said.

Danny Johns and Bertha McLendon were just as excited and honored to be chosen Valentine King and Queen at TH&R. They were chosen by the TH&R staff.

“I’m 61 years old and this is the first time I’ve ever won anything,” King Danny said, with a broad smile.

Johns is originally from Luverne and has been a resident at TH&R for about four years.

“I grew up in the country and I love being outside. I like to hunt and fish,” he said. I’ve got an eight-point mounted on the wall at home.”

When he wasn’t hunting or fishing, Johns drove a truck for Wiley Sanders Truck Lines.

“I liked going to Miami and seeing all those pretty girls,” he said, laughing. “I like it out here. People are good to me and I like sitting on the porch. If I could do anything as a king it would be to make it so everybody could go outside more.”

Queen Bertha said she was excited to be name the Valentine Queen and thanked the staff of TH&R for selecting her.

McLendon is originally from Banks and she is especially proud of her five children, eight grandchildren and 11 great grandchildren. And, the way she sees, that makes her a rich lady, like a queen.

Mrs. McLendon has been at TH&R for about four years and enjoys the fellowship of the other residents. And, she like playing the games.

Although she doesn’t get to go fishing anymore, Mrs. McLendon said the next best thing is playing “Go Fishing” at her home away from home.”