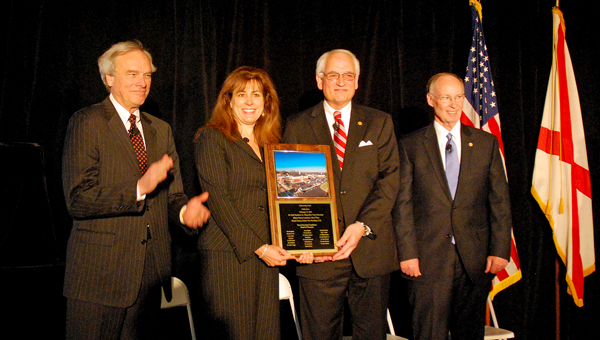 Dozens of people gathered Friday morning for the dedication of University Park, which is the home of the new CGI Group, Inc., office building.

“One of the things that I think is so important, as we try to produce jobs in the state of Alabama, is to remember that we need to use good minds to do this,” Bentley said. “And, one of the things that we’ve been looking at lately is workforce development in this state and how we can use the people of the state that have the ability and the intelligence, and the organizational skills to help us create jobs.”

Bentley says his No. 1 priority is creating new jobs for the state of Alabama and the economic incentives that CGI brings to Troy not only benefit the city, but the state as a whole.

“We are going to put together an incubator for workforce development,” Bentley said. “This would include our two-year systems as well as our four-year systems, so that we can take advantage of the sharp minds that we have at all of the universities across this state. We must create this incubator in order to create a way to help people go back to work in Alabama and we’re going to work with the universities to do that.”

Bentley stressed the importance of jobs during the dedication ceremony and says that it’s universities like Troy University, in partnership with IT companies like CGI that are instrumental in bringing brighter minds back to the state of Alabama.

“As I see things like this, CGI, and the jobs that are being created here through this university, it makes me proud to be your governor and an Alabamian,” Bentley said. “Creating jobs is my number one goal, and until we put people back to work, the government won’t work very well.”

Nazzic Turner, Senior Vice-President and General Manager for CGI’s U.S. Enterprise Markets, commented on the shared vision and partnership that CGI has with Troy University and the City of Troy.

“We here at CGI do believe that businesses have a responsibility to give back to America. CGI is committed to that vision. Since 2007, CGI has created hundreds of well-paying, high-quality, technology jobs in rural America, fueling economic development in the community,” Turner said. “In partnership with the great state of Alabama, the City of Troy and Troy University, we’ve turned this commitment into a reality.”

Turner says that the CGI center in Troy will provide world-class information technology, systems development, maintenance and integration services to a variety of U.S. Federal, state, local and commercial clients.

With a delicate blend of vision and action, Turner is confident that the partnership CGI has with the university and the city will help to change the local economy and the economic well-being of the state for the better.

Mayor Jimmy Lunsford voiced his excitement about the future economic growth that CGI’s presence will bring.

“CGI means a lot to us. During the recruiting process, I referred to them as the missing link, because we’ve got Lockheed Martin, Sikorsky, KW Plastics and Troy University,” Lunsford said. “We’ve got things going for us here in Troy, Alabama, but we didn’t have those IT-type jobs that could keep our brightest at home and bring our brightest back home to Troy.”

Lunsford anticipates that the presence of CGI will act as a magnet to attract the bright young minds that comprise the future working-class citizens here in Troy.

Chancellor Jack Hawkins Jr. championed the partnership as an opportunity to go way beyond the “brick and mortar” of University Park and gave his vision of the university of the future.

“The successful university of the future will, in effect, have three broad dimensions,” Hawkins said. “It will be high-tech, which is the very thing that we’re realizing here. It will be international. And, it will also be that for which Troy University has long since been known, and that is a “high-touch” dimension, because, in the end, this is not about widgets, this about people shaping minds and value systems and doing that to make a better order in this country for the future.”

Hawkins says that all those ingredients exist here, but that it can’t exist without a strong relationship with the community and with the state.

“Our shared vision with CGI is being realized and I really believe that the best, the very best, for this community, this state and this university is yet to come,” Hawkins said.

Turner agreed with the chancellor’s positive outlook on the impact the partnership will have on the surrounding community.

“I think he’s absolutely right,” Turner said. “If you look at where we are from a growth perspective, we’re about half-way through our commitment to the state and are certainly far ahead of schedule. I think we have many more jobs to bring on over the course of the next 18 months or so, and then I think from there we just see what’s possible. Certainly with the demand in the industry, coupled with the partnership with the state, the city and the university, I think we could certainly envision continued growth, possibly increasing that capacity, whether it’s physically here or in and around Alabama, which is an option as well.”

Turner says that the goal of CGI is to exceed the commitment they have with the state of providing 300 jobs and, hopefully, fill more spots by the end of 2012.