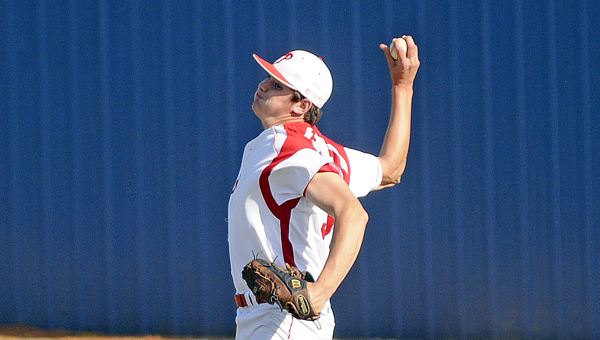 Sam Carroll adds experience to the PLAS outfield this season.

While the Pike Liberal Arts Patriots may have a relatively young infield, the same cannot be said for the three positions beyond them.

The Patriots’ outfield will be the exact opposite, as the team will be returning all three starters from a year ago.

Leading the charge will be junior Nick McLaughlin in centerfield, followed by seniors Evan Strother and Sam Carroll in left and right.

Each of those three played the majority of the 35 games last season in the outfield, and that kind of experience has head coach Butch Austin excited for what lies ahead this season.

“I think we are going to have a good outfield and they all have good arms,” Austin said.

“They all played there before too, which is great. We are going to be alright in the outfield. We got Nick out in center and he can cover a lot of ground, Evan in left field, he is a real good defensive ball player and Sam in right, when he is not pitching. There is no doubt, that’s going to be the strongest area on the field for us.”

Along with the three upperclassmen, sophomore Tatum Barnes will be the team’s utility man, going from one position to another when called upon.

Still, the fact that Austin will have three of his outfielders back from a season ago could mean the difference between winning and losing, especially in the other fields around the region.

“It’s good to have experienced outfielders, especially in the big parks that we play in,” the coach said.

“Our park isn’t the biggest but Glennwood and Lee-Scott has some pretty big parks and it’s pretty good to have these guys be able to move around and get the ball.”

As far as the Patriots’ home field, there are some significant areas, which could cause problems for players, especially in left field where there is a 100-foot wall.

But for Strother it does not pose a threat thanks to his time last season.

“There is usually a lot of action at this level (in the outfield),” Strother said. “That always makes it fun.

“If I am on the field, I am going to be giving all I got. I figured out how to play the left field wall last year. It took some reps, but after a while, I figured out a good idea where the ball will be going after it hits.”

To Strother’s left will be McLaughlin, who also learned how to play his position during last season.

And it’s thanks to some preseason conditioning that allows the junior to do his job.

“You have to do a lot of running to get in shape, if you want to cover all that ground,” McLaughlin said. “You can’t really be too tired out there.”

There is also another role McLaughlin wants this season, besides tracking down fly balls.

“I’d like to take on the leader role in the outfield, let the other guys know what’s going on around us,” he said. “Last year was the first time for me out there, it took a while for me to figure out fly balls. But I think this year, our outfield is going to be pretty solid.”

Along with the running each of the Patriots haave to do, there is also a special drill for the outfielders to help better prepare them for what is to come in the season.

“You have to have a good jump on the ball,” Austin said, “to me, that’s what makes a good outfielder.

“We have been doing drills where the guys will have their backs to the batters, and they have to turn around when they hear the crack of the bat and find the ball. That gets you better at picking the ball up quick.”