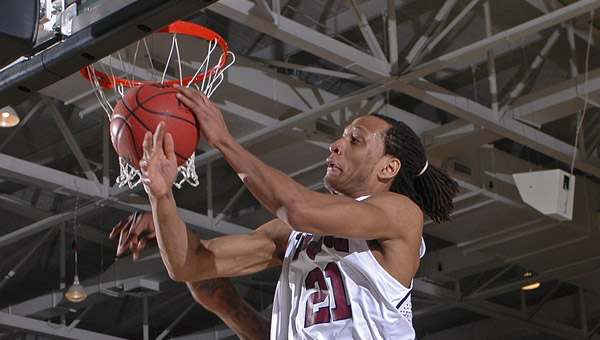 Troy University's Bernard Toombs (21) goes up for a rebound during an NCAA basketball game against Florida International in Troy, Ala., Thursday, Feb. 3, 2011. (Messenger Staff Photo/Thomas Graning)

It took a career night from an unlikely South Alabama player to sink the Trojans two weeks ago at Sartain Hall, and when Troy made their visit to Mobile Thursday night, they responded in kind.

Despite a knee-injury that has plagued senior Travis Lee all season long, the guard took the spotlight against the Jaguars and led the way to a Trojan 72-59 victory.

The win improved Troy to 6-17, and 4-7 in Sun Belt play, and also provided some payback for the last time the two teams met, an 83-78 USA victory in Troy.

“That’s the only instate school in our conference and the games have started to develop into a bit of a rivalry. It’s always nice, but in this league you don’t get to enjoy it too long, especially when you have a game the night after.”

Troy hit 10-of-20 3-point attempts, with the majority of the baskets being hit by Lee, who finished with six in all.

The senior finished with a game-high, 28 points in his fourth start of the season.

“I was hoping for that,” Maestri said about the team’s ability to shoot the ball. “We obviously played a lot better in every phase of the game from passing execution to ball handling

“When you shoot 50 percent, for us, that definitely means we shot it a lot better. We had an outstanding performance from Travis Lee. He had a great shooting night, he really was a big difference maker.”

The excitement brought on by the win will not last much longer, however, as the Trojans will be back in action tonight against a conference foe it has not seen in a year.

For the third-straight season, the Denver Pioneers will be making the cross-country trip to Troy, and there, the team from the Mile High City has had a rocky time winning games.

Last season, the Trojans sent the Pioneers packing with a 64-46 win, while two seasons ago, Troy snuck away with a 76-72 victory in overtime.

This will be just the seventh time the two teams have met, with Troy holding a 4-2 lead in the all-time series, with each victory coming in Sartain Hall.

Currently, the Pioneers are leading the conference’s West Division with an 8-3 record. Overall, the team is 12-12.

Even though Trojan Arena has been a house of horrors for Denver as of late, Maestri said he does not expect a double-digit victory this time around.

“I don’t think it’s going to be the same result this year,” Maestri said.

“Denver has a totally different contracting style of play. They have an outstanding style of play. They started off poorly but (head coach Joe Scott) has them in first place in their division. They are coming off a 30-point win over Florida Atlantic, who was in first place in our division. He just does an outstanding job and it’s unique because they are the only team that plays like that in our conference. They are extremely patient on offence. Defensively, they have the most unique defense in the league the way they switch everything and they never give up fast break lay ups. The philosophy is a solid one, it’s based on percentage basketball. It really controls the tempo of the game. It’s a tough system to play against.”

Because of the problems Denver’s style may present to the Trojans, the head coach said his team will have to adjust in their own way to be successful.

“Our mindset will have to change to some degree,” he said, “in that, we have to be a little more patient.

“I think if you really rush yourself too much against Denver, you are playing into their hands. Last year, it was not a normal game, they missed a lot of shots. The year before, we barely beat them – we had a miracle comeback.”

And while Troy had a lot of help coming from one player in their win over the Jaguars, Maestri said that cannot be the case today – every player is going to have to play well for a win.

“The key for us is all of our guys are going to have to play well,” Maestri said.

“This is a case where Mo (Weathers) is going to have to run the show for us. We are going to have to have Regis (Huddleston) and Travis shoot well from the three. (Vernon Taylor), Steve (Cunningham) and Levan (Patsatia) have to play well. Denver is not the type of team where you have one or two guys playing well and you come out on top. You have to have a lot of people play well and they make you play that way. They make you step up to the plate, and if you don’t, you’re in trouble that night.”

Troy and Denver will get underway at 7:30 p.m. tonight at Sartain Hall.