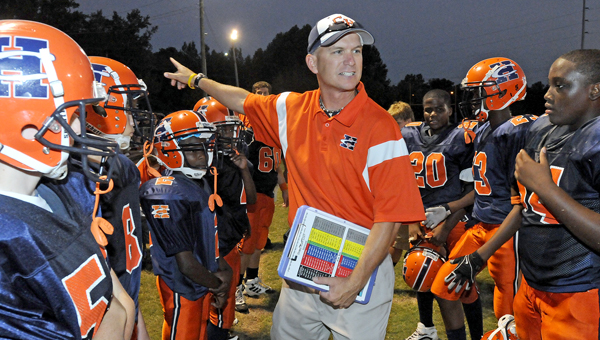 It was this time last year that Robin Snyder was coaching the Charles Henderson freshmen baseball team.

A year later, Snyder is still coaching a Trojan team on a diamond, however, this time around he has switched sports.

It was shortly after former softball head coach Chad Lapp had announced that he would be returning to his alma mater Carroll to become the head coach of the football team that Synder was tapped to take his place.

Now, with the beginning of the season less than two weeks away, both Snyder and his new team are busy getting ready for what both hope to be a successive season both on and off the field.

While both softball and baseball may share some similarities, the new head coach said he is going to be taking the same kind of mentality that he has had with his other teams to his new one.

“There is not a whole lot of difference between the two sports,” Snyder said.

“The fundamentals are basically the same, but the overall prospective of the game is different. To me, coaching, regardless of what you are coaching is about motivation,” he added. “Most of the girls at this age have been around it to know how to play, so you have to keep them focused, and keep them going in the right direction and make sure they are working together as a team.”

The Trojans have been throwing together for over a month now, but even though the first practice of the season was officially Jan. 31, the team has not had much time out on the field thanks to the recent strings of thunderstorm hitting the county in the late afternoons.

Tuesday of this week was the first time the girls were out on the field but thanks to some of the equipment at the high school, all was not lost to the weather.

“We have a lot of advantages that most schools don’t have with the indoor facilities (at Charles Henderson),” Snyder said.

“We have spent a lot of time in the batting cages, which is always a good thing. But now, we get to field some, and I think everyone has been looking forward to that.”

And so far, so good according to the new coach, who said he likes what he has seen from his team.

“All the girls have responded pretty well so far,” the coach said, “they have been working hard for us.

“We stressed to them teamwork and family, and that is going to be our perspective all year. Working hard, staying focused and working together for the same goal. Realizing that we are a family in this whole thing. Sure, there are going to be times when we maybe don’t see eye to eye on some things, but we are going to make it through. Softball is a long season, there are going to be some bumps and bruises along the way, but we hope in the end, we can put together a successful season.”

The area where Snyder said he hopes his team is at its strongest is in the field defensively, and with two strong pitchers in senior Courtney Wood and junior Melissa Kennedy, that should not be a problem for the Trojans.

“We want to thrive on our defense,” Snyder said.

“If we are able to keep the other team’s runs down, and not make errors, we are going to be in every game this season. That’s the main thing we are stressing to them. Melissa and Courtney are going to be the two main pitchers. We don’t have necessarily a No. 1 or No. 2 pitcher because both of them are really side-by-side as far as one more throws a little harder while the other has a little bit more movement. They both have a lot to offer this season.”

Like any coach, Snyder said winning it all is the main objective for his team this season, but he also wants to have a team full of girls who go about their lives in a respectable way.

Any coach’s expectations is to make it to the state championship,” he said.

“But the main thing we want them to do is to be successful, to teach them things about life, not just on the field but off the field as well. Of course, as a coach, you are measured by your wins and losses, but my personal goal is to help them become successful young ladies.”