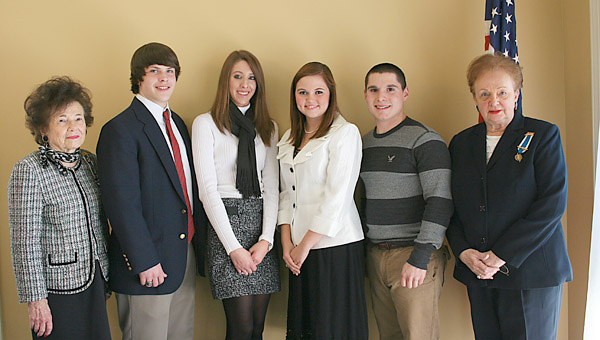 Emily Ward, a senior a Pike Liberal Arts School, was named the Oliver Wiley Chapter Daughters of the American Revolution’s Good Citizen of the Year.

The Chapter recognized the Good Citizens from each of the county’s four high schools at its February meeting Wednesday afternoon at Troy Country Club.

“All four of our Good Citizens are winners because they have been honored by their schools,” said Ann Williams, Chapter education chair.

Each of the school winners wrote an essay about ways to preserve the country’s heritage.

The winner of the Oliver Wiley Chapter’s 2011 Good Citizen Award was chosen by judges outside the Chapter.

“All four of the students had excellent essays and the voting was close,” Williams said. “But one had to be selected. We congratulate all of our Good Citizens.”

Ward is an honor student at PLAS and is an active member of the Science Club, the Student Government Association, the Spanish Club and president of the Christian Action Club. She is a varsity cheerleader.

She is dedicated to helping others and is involved in community and church activities.

Jordan has a 4.0 grade point average at Charles Henderson High School. She is a fourth year Spanish student and president of the Spanish Club. She is a member of the National Honor Society, president of the Twenty-One social/service club and a volunteer with the Special Olympics and the Salvation Army.

Lusk is a class officer at Goshen High School. He is company commander of the JROTC and a member of the drill team and the color guard. Lusk plays baseball, runs track and is the drum major for the Goshen marching band. He is a member of the SGA and the Math and Beta clubs. He is an Eagle Scout.

Shirah is an honor student at PCHS and maintains the highest GPA in the U.S. History class. He is a varsity athlete in football and baseball and a championship weight lifter. Shirah works a local food market and volunteers with the Pike Regional Child Advocacy Center, the Pioneer Museum of Alabama and the Humane Society of Pike County. He also reads for the blind on Troy University radio.

Williams said all four Good Citizens are exemplary students and should be successful in whatever they choose to do in life.