Trojans hold off Tigers in finale 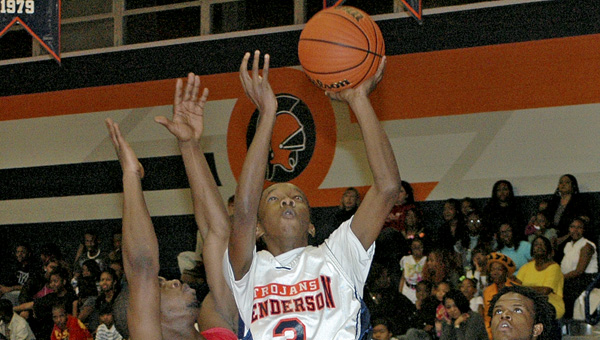 There was much to celebrate before the Charles Henderson basketball game against Dothan Friday night.

And there was just as much more to celebrate after wards, as well.

In the regular season finale, the Trojans paid homage to its two seniors, guard Michael Zackery and forward Nick Stewart, on senior night, and his teammates responded in kind with a big 43-37 over the rival Tigers.

“The first quarter played a big role for us, as far as confidence goes. We held on to it. They took they lead one time and we came back and countered with a bucket of our own when it mattered. That was important too, because they could have stayed ahead and we could have dropped our heads, but we kept them up.”

In the first period, the game was scoreless for nearly the first five minutes, as both teams sized one another up.

It was the Trojans who struck first, going on a 6-2 run, capped off by a Devin Davenport slam-dunk.

As it turned out, that early four-point lead would make all the difference when the game got down to the final moments.

Both the first two quarters ended with CHHS four-point lead, as the Trojans led 11-7 and 20-16.

Dothan began to make their move at the beginning of the second half.

In that quarter, the Tigers outscored the Trojans 14-12, to cut the lead to just two points. And that rally continued into the fourth quarter, when the Tigers took their only lead of the game, 35-34, with 6:45 left to play.

The Trojans would respond immediately.

CHHS would regain the lead, and pull away, thanks to a 6-2 run late in the game. After consecutive misses by Dothan, three key CHHS free throws all but sealed the victory.

“This team has come a long way since the beginning of the season,” Hollis said.

“We still got a long ways to go, but these guys have come a long, long ways.”

Leading the charge for the Trojans was Tyler Mitchell, who finished one rebound shy of a double-double, scoring 12 points and grabbing nine boards.

“Down the stretch, we took care of the ball,” Hollis said.

“And down the stretch we made our free throws. We have been in ball games where we didn’t do either when it mattered and ended up losing close late. When you got an opportunity to win at the line, you got to capitalize.”

CHHS was able to hold off Dothan, despite committing 23 turnovers thanks to it’s shooting.

“Dothan played some good pressure defense, and that will give us something to work on,” the head coach pointed out. “It was good on all accounts to play ahead. There have been times where we have come from behind to get a lead but haven’t been able to hold on. But we fought hard, and I’m proud of them.”