Troy unable to overcome deficit in loss to FIU 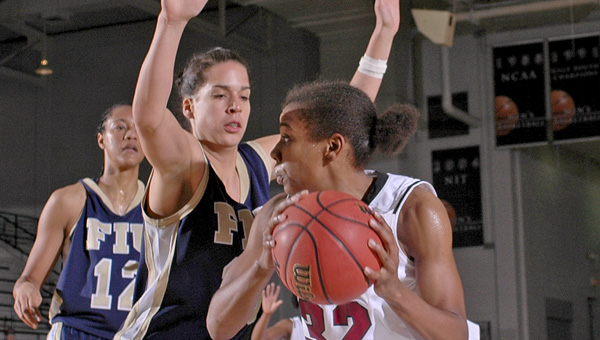 Another game, another tough loss for the Troy Trojans women’s basketball team.

It very well could have gone the other way for the home team however.

With under a minute to play, and Troy down 55-53 to FIU, DeAngela Sword got the ball in her hands and took she shot.

A whistle was blown as the basket was made, but it was one that was not in the Trojans’ favor, as traveling was called.

FIU would get the ball and the game after the position, winning 57-53, and sending Troy to a dismal 5-17 overall record.

“Obviously, this is a very disappointing loss,” head coach Michael Murphy said afterwards. “I thought we played well enough to give ourselves a shot in the second half.

“We just did not take care of the ball down the stretch and did not execute well enough to win the game.”

It was a combination of Sword and Donette McNair that led the way for the Trojans in the first half, as the two scored 19 of the team’s 28 points, helping the team gain lead as high as seven points.

The lead would fall in the second half, as both teams battled for control.

With the scored tied at 49-49, FIU would hit a jumper giving them the lead for good.

The Trojans committed 21 turnovers in the game, as statistic that Murphy would later say played the biggest difference between the two teams.

“When you have two juniors that account for 13 turnovers – that’s a bunch of turnovers,” the coach said.

“(FIU) made some adjustments, but I still felt like we were able to get what wanted inside. We went back and fourth for the whole game, really. But the 21 turnovers were key. That’s what really hurt us last week. I thought we did a good job of fighting back in the second half to getting ourselves a lead. We can’t just rely on Sophie (Kleeman) to take care of the ball, other people have to be able to comfortable with the ball, right now it’s hard to find someone to do that, and that’s where our injuries have killed us.”

But in the end, it was the last two potential points for Sword that proved to be the difference for Troy.

“To be honest, I don’t know whether she did or didn’t,” Murphy said. “I thought it was a good move. I thought we got a good look from our leading scorer, I thought we were getting ready to get a three-point play. But you take that basket away, that’s a huge, huge momentum shift. I guess, if they called a travel, it’s a travel. “

FIU sneaks out of Troy with one-point win