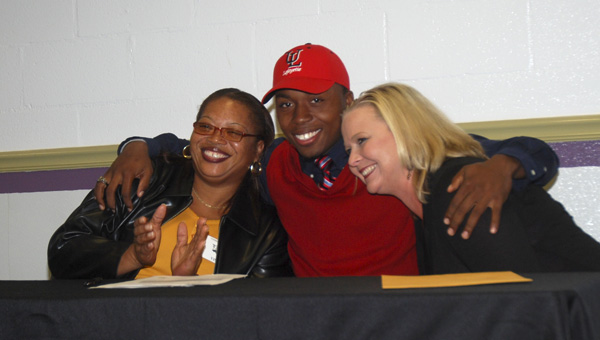 Goshen running back Marcus Jackson hugs some of his family members after signing with Louisiana-Lafayette Wednesday morning in Goshen.

All throughout the fall months, there was much talk about which school talented Goshen running back Marcus Jackson would end up committing to in February.

When it was all said it done, the 5-foot-10, 195-pound rusher wound up in a Sun Belt Conference school – but the one he grew up cheering for in his own backyard.

While it has been known for over a week now that Jackson would be committing to the University of Louisiana-Lafayette, that was not the case two weeks ago until the Ragin’ Cajuns new head coach, Mark Hudspeth, paid a visit to Goshen High School in the hopes of grabbing the best senior running back in Pike County.

After spending some time with both the coach and on campus, Jackson knew this was the place he wanted to be.

“I got this good feeling,” he added. “I feel real good about my decision, I met coach Hudspeth, who is a great coach. I never thought I would be going to a (Division 1) school, but a prayed about it a lot and put God first, and He helped me make my final decision.”

For the second-straight season, Jackson rushed for over 1,000 yards as he helped lead his Eagles to another 2A playoff berth.

In his final season at Goshen, Jackson finished with 1,380 yards on 103 carries, while scoring 20 total touchdowns.

“We needed some one to go to and of course, Marcus was always there for us. He did an outstanding job for us and the other kids respect him so much. We are all just so proud of him. He has led us to two great years and I know he is going to continue to make us proud at the next level.”

The signing marks just the second player to commit to a Division 1 school in the high school’s history.

The first was Michael Pelton, who signed with Auburn in the early 1990s.

As an interesting turn of events, both former Eagles will be on the same team next season, as Pelton joined on with the ULL coaching staff in January.

While there were several schools that showed interest in Jackson, Troy was not one.

“I feel like if Troy would have offered me a scholarship, I would have gone there. But they didn’t offer me, and I guess it’s like they say, I guess Troy doesn’t recruit locally.”

Even though ULL may have finished 3-9 last season with a running offense that was ranked 111th in the nation and eighth in the Sun Belt, Jackson said he believes he will be going to a Ragin’ Cajun team that is on the rise.

“(Hudspeth) told me that he was trying to get the program up and in order to get there, they needed me,” the running back said.

“He told me if I work hard, I’ll be able to play and that has me excited. I am really happy with (Louisiana-Lafayette),” Jackson continued.

“They have so much going on down there. The people are nice, the coaches are a great and I really like the atmosphere down there.”