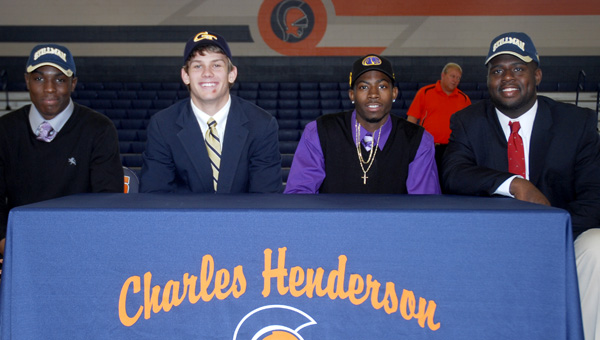 Wednesday was a day to remember for select football players all around the country, including Pike County’s own.

It was a day when official commitments were made and dreams were fulfilled, as high school players make the next step into the collegiate level.

As it does every year, Pike County embraced the national sports holiday with festivities of its own throughout the county.

Jeffrey Barker and Devin Baker committed to Stillman College, while Laquavious “Tre” Bryant and Quintus Moss signed with the University of North Alabama.

Corey Dennis will be taking his talents to the “Peach State,” as he committed to Georgia Tech.

“The football program is awesome up there,” Bryant said about North Alabama.

“I talked to the coaches and they told me if I go out there and bust my butt, I would be on the field in no time. I want to get out there on the field and help give Charles Henderson a name.”

At North Alabama, Bryant will likely be a cornerback, a position he knows well thanks to the last two seasons as a Trojan.

“I’m going to learn a lot of stuff up there, but I feel like the experiences I got at Charles Henderson are going to be ones that will really help me out.”

While there is a chance Moss will be playing in the defensive secondary as well, he hopes to be on the other side of the ball.

“I’m hoping I get some time as a running back,” he said. “But overall, I am very happy and thankful to be going to North Alabama.

“They are a team that is and has been pretty competitive over the last couple of years and that was something that was attractive to me.”

Something else that was attractive to both players was not only the look and feel of the campus, but also what is living on it. North Alabama’s nickname is the Lions, and in honor of that, the school has two lions, Leo III and UNA.

“The campus is set out nicely,” Bryant said. “But they also have lions on campus and I like that a lot.

The other duo of Trojans heading to college together, Barker and Baker, said Stillman was perfect for them because of different reasons.

“(Stillman) has a great program, their coaches are all really nice and really stood out to me and they have really strong academics,” Barker said about his new school.

At Stillman, Barker said he would be playing as a strong safety.

“I’m excited to be going up there, I can’t even explain my feelings about it,” he said.

And while Baker is happy he will get the chance to continue his football career, its his academic career that he is more proud to see continue.

“I could have went to any bigger school if I wanted to, but I felt like I could get a better education in a smaller school,” Baker said. “I am really wanted to get a college degree and this was a place to play football and focus on my academics.”

The reason why the education played such a big role in Baker’s decision was simple, he would become the first member of his household to get a four-year degree.

As a Jacket, the 6-foot-2, 205-pound Dennis will either be a quarterback or safety, according to Tech head coach Paul Johnson.

But either way, Dennis said he would be ready to go, when the time comes.

“It feels awesome, I am excited,” Dennis said, “I am ready to get up to Atlanta and get started.”

“It is kind of frightening to think about the kind of competition I will be going up against, but at the same time, I played against C.J. Mosley, who started at Alabama and I competed against (Jawara White), who is a linebacker at Auburn, everyday, so I am nervous but then again I have seen this kind of talent before.”

Seeing players sign to the next level is nothing new to Trojan head coach Hugh Fountain, but to see these five players go is bittersweet in its own way.

“When you look at us this year, Corey, Quintus, Tre, Jeffrey Barker, I don’t know the percentages but they were basically 90 percent of the offense, if not more, this year,” Fountain said. “A big chuck of this particular team, but as far as their legacy here, their play on the field speaks for itself and they have a chance to further that legacy in the next four years.

“It’s a great day for the kids who get a chance to sign a scholarship because it gives them the chance to fulfill a dream,” Fountain continued.

“Every kid that walks up here in the ninth grade that’s playing sports what’s to go to college and be an athlete. That’s just what they want to do. And when you see a kid that reaches that pinnacle, it makes you feel good about it.”