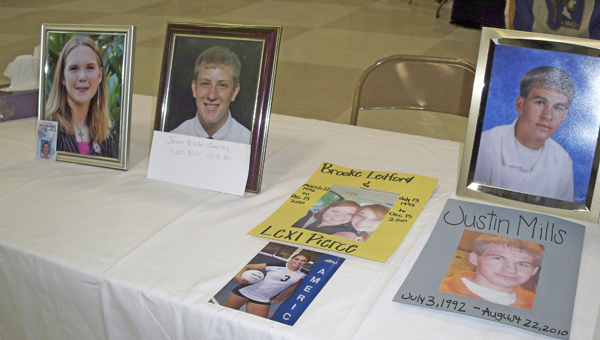 Pictures of local teens who died in vehicle wrecks offere memorials at the recent program.

Jamie Scarbrough describes the “It Won’t Happen to Me” program as “an eye-opener for parents and teens.”

Scarbrough, who serves as circuit clerk in Pike County, was one of more than 450 adults and teens who attended the presentation Friday night.

“As a parent, it made me realize some of the things I need to talk to my children about, such as not texting while driving or driving with too many kids in the car,” she said.

“We organized the event to let kids know that any kind of distraction can cause an accident,” Garrett said.

Garrett has observed the many distractions teens face while driving and wanted to let theens know just how dangerous these distractions can be.

“There are many distractions that, to most drivers, just don’t seem like too big of a deal,” Garrett said. “Anything, from having too many people in the car, texting while driving, looking around to see the person in the vehicle next to you, or something as innocent as reaching for a CD to listen to, can cause an accident.”

The program, “It Won’t Happen to Me,” was developed as a direct response to the number one cause of death for teens: vehicle accidents. The theme comes from the misguided belief that most teen drivers have about their safety behind the wheel and the feeling of being impervious to car crashes.

Statistics taken from Richardson’s website reveal that “over 6,000 teens die in car crashes every year” and that 70 percent of these accidents could have been avoided. The website suggests, inexperience and distractions are the main cause of teen car crashes.

“My main goal in trying to get the program here was to let the teens know that when they do have accidents, it affects all of us,” Garrett said. “We wanted to make them aware of the things that do cause accidents, so we can prevent them from happening.”

Garrett, who is all too familiar with the pain that comes from the loss of a loved one, attested to the necessity of teens’ paying attention to their surroundings while driving.

“They just need to think about some of the things they decide to do while driving,” Garrett said. “If something were to happen to them, their parents and their closest friends would hurt.”

Scarbrough helped organize the event and noted the appropriateness of the title of Richardson’s program. “It’s the mindset of teenagers,” Scarbrough said. “I just hope the program opened their eyes to how dangerous driving can be.”

It is not without a great deal of thanks that Garrett attributes the success of Friday evening’s event to all the sponsors and people involved in the presentation.