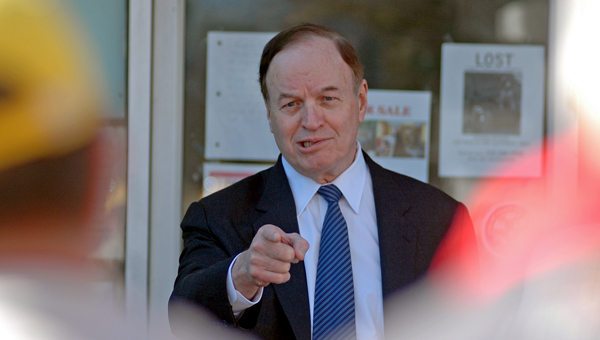 Amid a crowd of more than 60 county officials, voters and hunters fresh from the woods, U.S. Sen. Richard Shelby spent an hour at the Banks Buy Rite on Saturday talking about government, democracy and the need for Republican leadership in Washington.

“There was a good amount of interest around here,” said Shelby, R-Ala. “This is my 25th meeting here in Pike County, and I’ve been to all kinds of places: lunches, dinners. Somebody said this time I needed to go to Banks, to the Buy Rite. They were right.”

“I voted against the health care bill,” the senator said to a round of applause from the crowd. “I said it then and I’ll say it now. We have the best health care system the world has ever known, and we need to build on that.”

Shelby, who reiterated his belief in the “law of supply and demand” said even though legislative efforts are underway to attempt to repeal the legislation, the bigger question in the health care debate is whether or not parts of the program will be funded this year.

“I serve on the appropriations committee … and I’m going to do everything I can to try and stall funding,” he said.

Citing the unrest in the Middle East, including the protests underway in Egypt, Shelby drove home the impact of the effort to “export democracy.” “A lot of this democracy they’re talking about is really fundamentalism,” he said. “When unemployment rates are 40, 50 percent in these countries, people are going to be upset … that is going to drive the price of oil up, up up and you’ll see it in $10 a gallon gas.

“ We can’t carry everybody’s water, and I don’t believe we can police the world.”

Concerns about the skyrocketing national debt were a common them among the audience. One resident cited a statistic he heard recently: for every dollar the government spends, it collects only 60 cents. The remaining 40 cents is borrowed from countries such as China.

“We’re exporting our wealth,” Shelby said. “Instead of keeping it here, we’re sending it countries like China.”

And when concerns were raised about “bailing out California with Alabama money,” Shelby pressed on: “Do we want to borrow money from China to send to Montgomery, or California? I say no.”

He reiterated that Congress will face difficult but necessary decisions in the upcoming year if the debt and out-of-control spending are to be curtailed.

“I’ll willing to make some difficult votes, that’s why I’m talking to you,” he said. “They might not be in my best interest, but it would be for the greater good.”