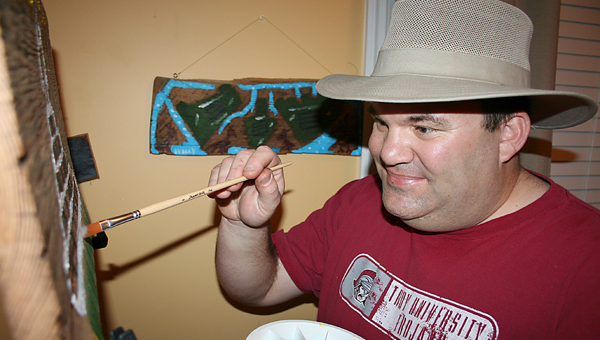 Wally Lowery, above, has been painting since 1993. His drawing consists of everything from animals to buildings and since he began, he has created more than 100 pieces that have been sold all across the country. (Photo/Jaine Treadwell)

Wally Lowery does most everything in an unconventional way.

Take the way he proposed to his sweetheart.

Wally had everything planned. He was going to row her out to the very middle of a sparkling lake — actually it was a pond — express his love for her then, with a brilliant sunset as a backdrop, present her with a dazzling diamond ring and ask her to share her life with him.

Wally rowed Holly just far enough into the pond that both of them were completely submerged when, as he reached for the ring, he tipped over the boat. But, that dousing didn’t put a damper on Wally’s plans. Soaking wet and muddy, he carried through with his plan. She accepted and Wally had a story that will be told for generations.

Wally’s a fast talker and a humorous storyteller because his life is full of craziness and he’s behind much of it.

Take the time, he was making grits for his wife but didn’t have all the ingredients that he needed.

“Well, the directions said, ‘yield, two cups,’ and I couldn’t find any yield in the pantry,” Wally said, laughing.

And, it was a crazy thing that happened in 1993 that unearthed the artistic creativity in Wally.

“It was a hot summer day and I was working on an archeological excavation near Stockton,” he said. “All of a sudden, a furious thunderstorm erupted and flooded a nearby emu – Dromaius novaehollandiae — (Wally likes to use big words) farm. All of the emus escaped their waterlogged pens. They were running wild everywhere. They attacked us like crazy. Three of the emus got after one of the boys and he ran for his life. I was inspired.”

All of those on the “dig” got a kick out of Wally’s primitive artwork and fully understood the symbolism behind the folksy emus. But every “bird” has its day.

“One of the Hieroglyphs was left on the archeological site and was probably destroyed,” Wally said. “We thought the other Hieroglyph was stolen but it turned up later.

One story that Wally is keeping tight lipped about is the story of the whereabouts of the Hieroglyph and why it was returned to him. That only adds to the mystique of the art piece. But one way or the other, he got the artwork back.

Wally likes to tell the story of how he discovered the Olmsted map that hangs in the Adams Administration Building on the campus of Troy University and how the Bibb Graves Quad was reconstructed to reflect the Olmsted drawing and changed forever the face of the university.

The map was later framed and returned to Troy University and the Emu Hieroglyph is no longer on display. Wally claims to know where it is but he isn’t talking.

During those years since 1993, Wally has continued “sketching” and his primitive drawings of emus, other animals and places of interest fit nicely into the category of folk art.

Wally has created more than 100 folk art pieces and has sold many across the country.

As the assistant director of the Alabama Judicial College, Wally knows judges in just about every county and some of them have even paid a few greenbacks for his art.

And each of Wally’s creations has a story and, once people hear the story, they want the art to carry with them as well as the story.

“I love to tell stories,” Wally said. “Once piece is of two fish there were found frozen at the edge of a pond. I do a lot of fish and I hang the paintings with fishing line. Another subject I really like the RSA Tower in Montgomery. His paintings are of cotton fields, snowmen in Alabama, a donkey on the golf course, cavemen, fruit and junk. And, I’ve got one of the Monster Fish of Walnut Creek.”

Wally always paints in oils, which dry very slowly and, for a man who talks at warp speed, that’s like watching grass grow. So, he just doesn’t watch. He hangs his paintings and sits at an empty “canvas” and creates another story.

“At first, I painted on canvas but I wanted my paintings to be more unique so I started painting on old boards and tin that came from the house where my daddy grew up,” Wally said. “The house and barn was built around 1927 and Hurricane Opal knocked everything down. So every now and then, I go out and gather wood and tin and prepare it for painting.”

Each of Wally’s paintings has a story and, if old walls and roofs could talk, so would the canvases. But that would be a lot of chatter surrounding Wally’s folk art and he would rather do the storytelling himself.

Wally sees himself as more of a teller of stories than a folk artist but he kind of likes the “artist” designation.

“The art’s a hobby but I enjoy it a lot,” he said. “My son Noah helps clean the canvases so he’s a part of the art process, too. I don’t know how far I’ll go as a folk artist or, if I’ll go at all. But, I used to visit Mose T a lot. He was the most incredible folk artist and he was my inspiration. He told me once, ‘Son, go with your heart. A painting don’t have to look pretty.’ My artwork might not look pretty but I’m going with my heart.” 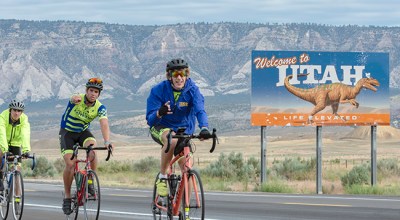