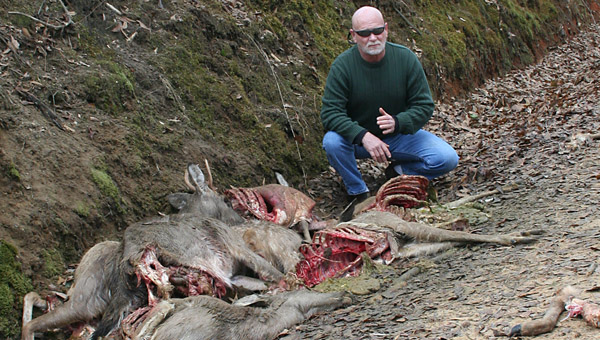 Whoever penned the song, “Did You Feed My Cow” with the repetitious “Did the buzzards come?” surely had visited Pike County during deer season.

Around this time of year, the buzzards do come to feed on the carcasses of the deer that have been harvested and then thrown along the roadways, and even in creeks, after the desired meat has been taken.

The Pike County Road Department was busy Wednesday morning removing deer carcasses from the roadways and burying them in a pit.

“The sky and trees have been filled with buzzards,” Senn said. “There are three dump sites on this road and with at least 15 deer carcasses. Whoever left them took the meat they wanted and dumped the rest. Some of the carcasses had only the backstrap gone. It’s a mess and the odor is awful.”

The deer were piled on top of each other at one dumpsite making it difficult to determine the exact number of carcasses.

The carcasses had been torn open by buzzards and other animals and the bones were scattered on the road.

“This is not the only place this is happening,” Senn said. “It’s all over the county. It’s bad enough when the carcasses are left on the roads, but when they are thrown in the creeks where nothing can get to them, that’s even worse.”

As deer season draws to a close, more hunters are in the woods and the potential for a larger harvest increases. Those deer have to be disposed of some way and it’s up to the hunters to make sure it is done legally.

“And, when dogs and buzzards gather around the carcasses, they pose a danger to those traveling the roadways,” Oliver said. “Then, when the odor gets unbearable, people start to call us and we have to go out and clean things up. We have to use our resources to remove the carcasses rather than doing productive work on the county’s roads and bridges. And, that’s at a big cost to the county.”

Oliver said the illegal dumping of deer carcasses is either a complete disregard for people and the environment or just plain laziness.

Oliver said hunters are urged to keep that in mind during the last days of deer season and respond as good sportsmen.