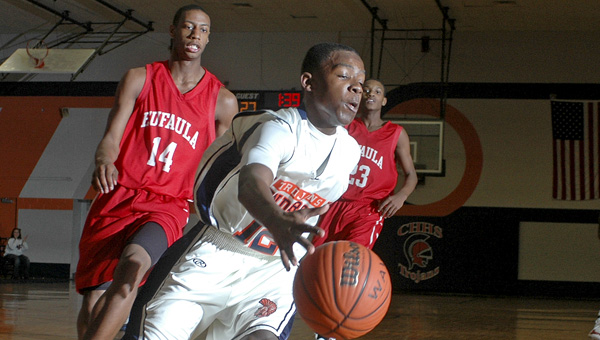 Charles Henderson High School's D.J. Jordan (12) attempts to save the ball from going out of bounds during a high school basketball game against Eufaula at CHHS in Troy, Ala., Friday, Jan. 21, 2011. (Messenger Staff Photo/Thomas Graning)

It has been a season of ups and downs for the Trojans of Charles Henderson.

While the rollercoaster season has seemed to have more downs than ups, the Trojans found themselves winners of two-straight ball games for the first time this season, and hoping to keep the good times rolling against Northview Saturday night.

However, the end result was one that both the players and the fans have become accustomed to, unfortunately.

“I think it was one of those games that we could have won,” head coach Carl Hollis said Monday evening, “and some of the kids even told me that after the game.

Making matters more troubling for the Trojans was Northview’s ability to hit key 3-pointers towards the end of the game.

“Northview ended up hitting four of five 3-pointers to get a big lead,” Hollis said.

“It was from an unexpected distance that they were making their shots. But we were still able to cut the lead down, but then we went cold. We missed way too many wide-open shots, we sort of beat ourselves in that game. We got to learn, that when you are close in a ball game, you have to do the right things with the basketball and work for high percentage shots.”

Even though the most recent game was a loss, it was one that did not affect the Trojans too much, as it was not an area game.

And even with a multitude of losses and controversy surrounding the head coach himself, with the area tournament growing near, Hollis said he believes his team still has a lot of fight in them.

“This team hasn’t given up yet, because they are always coming to practice and working hard,” the coach said.

“There are some days where I think they can be working harder. I have been singing them a song that something good is going to happen. I don’t want to happen their senior year, I want it to happen this year. We have all been through a lot of ups and downs together. This season is all about getting experience, but a lot of people don’t want that – they want champions now.”

As for the tournament itself, currently, the Trojans are in third place, thanks to last week’s wins over Carroll and Eufaula.

If the standings hold between now and the start of the tournament, which will begin on Friday, Feb. 11, CHHS would take on Carroll for a fourth time this season in Rehobeth, who is the area leader right now.

While Hollis said he has had teams succeed beyond their expectations in tournaments past, this season’s success in the tournament is going to come down to the participation both on and off the court.

“What we need right now, is our fans to come in, fill up our gym and support our kids. I come from a community, when your down, the community gets behind you and pushes you up, but I think sometimes in this community, some will talk you further down. But you got to get behind the kids and push them up to the level you want them at, and if you do that, they will respond and take it to another level.”