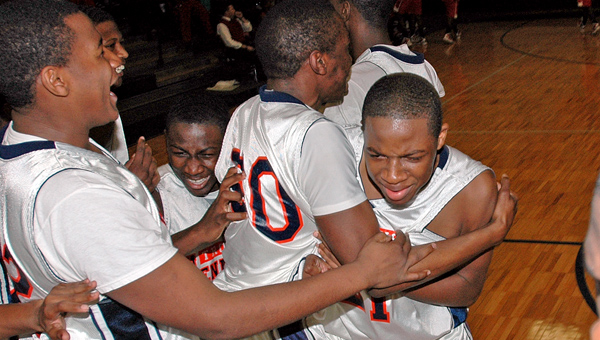 Tyler Mitchell’s foul shot was more than just lucky Friday night. It was the key to the game.

Mitchell shot the lay-up that brought the Charles Henderson Trojans to a 64-64 tie in overtime against Eufaula on Friday. During that shot, he was fouled.

“And then he shot the free throw to win the game,” said Coach Carl Hollis.

With a 65-64 final score, Hollis said the Trojans earned a much-needed victory.

“We haven’t won many games this season,” he said.

But in Friday’s overtime battle, Hollis said the team proved its determination.

“I’m proud of the way they played tonight,” he said. “They played hard through the whole game and wanted to win.

“I’m very proud of them for not giving up.”

After a “see-saw” game in which the Trojans traded the lead with Eufaula several times, Hollis said CHHS was able to tie the score 64-64 in the final seconds of regulation.

“We took the shot a little earlier than I would have liked, and Eufaula was able to get the ball back,” Hollis said. “They drove down and shot a three at the buzzer, but it fell short.”

That lucky break lead to the overtime, where CHHS caught another lucky break.

“They never did give up,” Hollis said. “We played decent defense and shot the ball a little bit better than we had been shooting it.”

Mitchell scored 26 points on the night. Michael Zachary was close behind with 24 points.