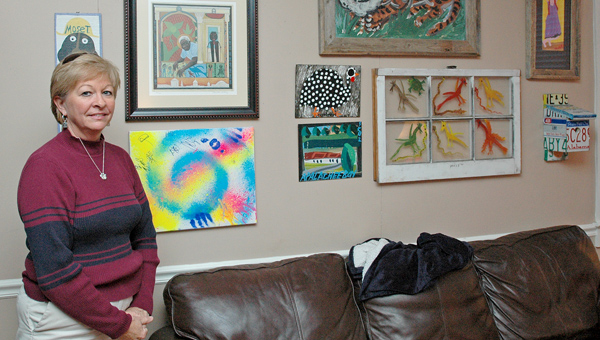 Ginger Boutwell poses for a photo in her house in Troy, Ala., Friday, Jan. 21, 2011. (Messenger Staff Photo/Thomas Graning)

Some things just naturally go together, like peanut butter and jelly and a needle and thread. And, it’s much same with folk art and storytelling, said Melissa Scarbrough, who is addicted to both.

Storytelling has always been a part of Scarbrough’s life. She grew up listening to and loving stories but it was about 20 years ago that she fell in love with folk art.

“Dr. Doug Hawkins got me interested in folk art and helped me get my first Mose T painting,” Scarbrough said. “We would go to Mose T’s house on Sayre Street in Montgomery and that was a real shopping experience. Mose T would have his pieces tacked on the wall and you would take down what you wanted and show it to him and he would tell you what he wanted for it. How much he charged depended on the mood he was in.”

Mose Tolliver, who was one of the premier folk artists in America, died in 2006. Scarbrough said she treasures the opportunities that she had to visit with him at his home studio and “gallery.”

“Mose T, Jimmie Lee Sudduth and Woodie Long were kind of the giants in the folk art world,” Scarbrough said. “Woodie Long had a studio at Santa Rosa Beach and every time I would go to the beach, I’d stop there.”

Betty Sue Matthews is from Brundidge and her gallery was the fence surrounding the dog pen in her yard.

“We’ve lost Jimmie Lee, Mose T and Woodie but Betty Sue is still producing and her work is on the rise as far as collectors go,” Scarbrough said. “I love all of their work and like to share it with others.”

Scarbrough and Ginger Boutwell are collectors of folk art and they put together a folk art exhibit each year for the Pike Piddlers Storytelling Festival at the Trojan Center Theater.

Scarbrough said the folk artists are often as fascinating as their artwork and have stories of their own to tell.

“There’s a huge connection between folk art and storytelling,” she said. “They are both folk arts.”

The Pike Piddlers Folk Art is held annually as an event of the Pike Piddlers Storytelling Festival sponsored by the Brundidge Historical Society the last weekend in January. The exhibit will be in the lobby area of the Trojan Center Theater and may be viewed from 10 a.m. until around 8:30 p.m. on Saturday.

The exhibit will include about 30 pieces by Alabama folk art giants and feature a life-size replica of Mose T.

The exhibit will also feature a painting by Charlie “The Tin Man” Lucas of Pink Lily. The painting is the design for the Pike Piddlers Storytelling Festival tee shirts and is used with permission from Lucas.

Lucas is another of Alabama’s folk art giants and his work is sold nationally and internationally.

Scarbrough said Lucas’s work is a continuation of the folk artists who have come before him and sets a standard for those who follow.

“Folk art is a passion for me and once you catch it, it never goes away,” she said.