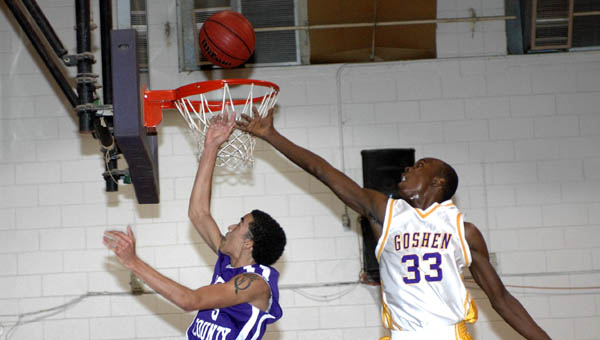 Pike County point guard, Quinton Arnold, gets his shot blocked by Goshen forward, Brandon Alford, in the first half the county rivalry game between the Bulldogs and the Eagles. (Photo/Greg Rossino)

Sometimes the first quarter of a basketball game can make all the difference in the world.

That was the case Thursday night in Goshen, as the Eagles played host to county rival Pike County.

And after eight minutes, the game was all but wrapped up for the visiting team.

The Bulldogs stormed out of the gate to a 25-8 lead after just one quarter of play, and as it turned out for Goshen, that margin was too much to overcome, as PCHS would go on to win 65-42.

“I think this was a pretty good win,” Rodney Jackson said. “My guys came out here and handled business well.

“We are just trying to get better, this is our second-straight win and I think this is something we can build off for area play.”

The win was the Bulldogs’ seventh of the season.

Besides the first quarter, both teams kept up with one another as both teams scored 14 points apiece in the second quarter, but the Eagles still found themselves down by 17 at halftime with a 39-22 score.

The competitive play continued in the second half, however, the first quarter still played a major difference, as the Bulldogs extended their lead over 20 points with four minutes still remaining in the third period.

The lead would hover around 20 points until the final buzzer rang.

As a whole, PCHS only outscored GHS 25-20 in the second half.

“The first quarter was a huge momentum swing for us,” Jackson said.

“We are a pressing team, and I think it was working pretty well for us (Thursday night). We run a diamond press and a 2-2-1 press and they were both very effective in the first half especially. We got a lot of steals and turned them into points, which you want to see.

“We got out to an early lead, which helped us get a 23-point win tonight, which is good to see.”

This was the second double-digit win for the Bulldogs over the Eagles this season, as the first matchup ended with a 63-32 final in Brundidge.

“I thought we did pretty good offensively,” the coach said.

“We penetrated and attacked the glass, and that’s my team. We got a pretty good point guard in Geraland Knox and he attacks hard and had a good game, so did Kendrick (Jackson) – all my guys had a good game (Thursday night).”

For the Eagles, Brandon Alford led the way with 13 points, while Kenyon Fuller scored and Jerome Lawrence added eight points each.

While the GHS boy’s team may have fallen to PCHS, the same could not be said about the girl’s team.

The Eagles cruised to a 47-34 victory Thursday night, taking down the Bulldogs for the second time this season.

“Both teams get up for this game. You have to get out here and play, and the girls stepped up to it (Thursday night). All the girls played, and did what they were supposed to.”

The Eagles had three players finish in double-digits, as Ivia Pollard, Nyoka Slater and Tiffany Jones scored 16, 14 and 13 points.

For the Bulldogs, Tierra Hall led the way with 16 points while Kelsey Terry added eight.

“We got to cut down on a few mistakes here and there. We have to get a little better shooting the ball, but we are starting to gel together, just trying to pull together before the area tournament.”