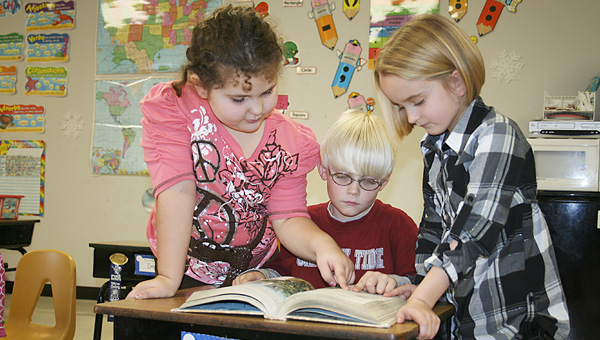 The first-grade students in Janna Blackwell’s class at Pike Liberal Arts School are getting the educational foundation they need to be successful in life at an AISA school that recently was awarded the Blue Ribbon distinction by the association. By working together, Kacie Bell, Andrew Adams and Ella Cate Gunter found the answer they were looking for in a book of Bible stories. (Photo/Jaine Treadwell)

PLAS Headmaster Ceil Sikes said there are 67 AISA schools and only 25 were awarded Blue Ribbon status.

“The AISA recognizes schools that maintain excellence in teaching and student performance with the Blue Ribbon designation and we are proud and honored to have been awarded this high standard recognition,” Sikes said. “This is the fourth year in a row that PLAS has attained this recognition and we are extremely excited and honored to, again, be a Blue Ribbon School.”

Sikes said school Pike Liberal Arts Blue Ribbon designation is an achievement awarded to its faculty and staff, which are dedicated to providing the highest quality of education possibl and to its students who are dedicated to excellence. The strong support of the parents and entire PLAS family also play a large role in attaining the Blue Ribbon School designation.

“Not only do we stress academics at PLAS, we also encourage service and interaction with the community,” Sikes said. “We are proud to have been recognized with this high standard recognition and that the AISA recognizes us as one of its Blue Ribbon Schools.

“This recognition means a lot to us because we know what we are doing at PLAS from the inside but to be viewed so positively from another direction is an honor.”

Herbert Traylor, AISA president, said PLAS has attained a high level of excellence in the areas of student and teacher performance, plant and facilities, student life and community involvement and is a very worthy recipient of the AISA Blue Ribbon School award.

Traylor said that the AISA has been steadfast in its efforts since 1970 to maintain an organization of independently operated non-public schools that are rich in diversity, committed to academic excellence and deeply concerned about the growth and development of children and youth.

The association’s goal is to provide quality educational opportunities for those parents choosing an alternative to public education.

Taylor gets seat on key panel