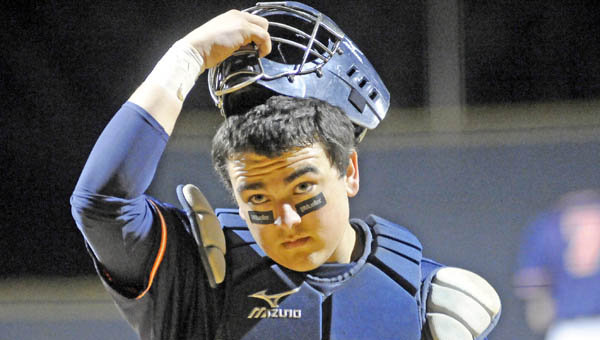 Charles Henderson High School's Chase Connell throws a ball back to the mound while warming up between innings during a baseball game in Troy, Ala., Feb. 26, 2010. (Messenger Staff Photo/Thomas Graning)

Thanks to a 34-10 overall record and No. 1 ranking last season, it was not difficult for most to realize there were some talented players on the Charles Henderson baseball team.

As a result, many landed scholarships to play at the next level.

Now, another name from that team can be added to that list as he looks forward to continuing the same kind of success endured last season in his final season in orange and blue.

Wednesday morning senior catcher Chase Connell signed on the dotted line in front of friends, family, teammates and coaches alike, as he officially committed to Wallace Community College in Selma.

“This is something that I am very excited and happy about,” Connell said.

“It is a relief to get it out of the way but at the same time, I am looking forward to start (at WCC).”

The Trojan finished with 12 doubles, and 40 RBI, both of which were team highs.

He also finished with a .339 batting average.

In the playoffs, Connell continued his productivity at the plate leading the team in doubles, with three, home runs, with three, and 12 RBI.

He had a .367 batting average as well in nine postseason games.

When it came down to choosing which school Connell wanted to attend, he said it was Wallace’s head coach, Frank Elliott, that was the deciding factor.

“I really liked the coach,” he said.

“He is a nice guy, and coaches the game the way it is supposed to be coached. That was something that really stood out to me, and something I wanted to be a part of.”

Before his time with the Patriots can begin, Connell will play out his final season with the Trojans at Frazier Field.

And with every new season, comes new challenges.

“I want to be more of the leader type player this year,” he said.

“Last year, I was more laid back but this year I have to be more vocal. I don’t think that is going to be difficult to me. I also want to work on hitting off speed pitches – I really want to try to hit more singles and doubles than I did last season.”

Like Connell, there is another who is looking forward to how the Trojan will follow up his breakout junior year in the upcoming season – head coach Derek Irons.

“He had a great junior year last year,” Irons said. “He was able to step in and fill a roll that we really needed in our lineup to drive guys in. He did a great job of hitting the ball and we expect great things out of him this year.”

Connell will be one of four seniors this upcoming season.

To see a player move on from one level to the next, is something Irons said makes his job so sweet.

“Anyone that has ever spent time with Chase knows that he loves baseball,” Irons said.

“I am so glad that he is going to get to continue to do that and play. On top of that, to be able to be on scholarship and to further his education is wonderful. Moments like these are always my favorites as a coach.”