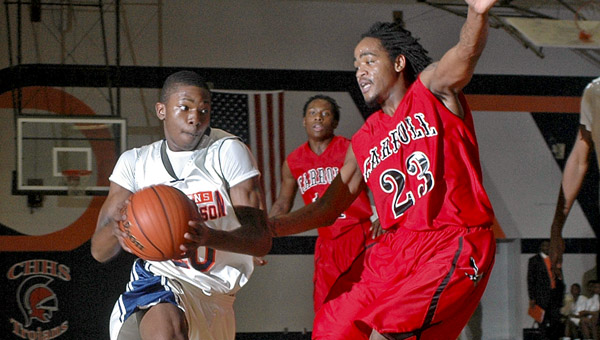 On top of a basketball game with the Trojans’ rival from Ozark, Carroll, there have been rumors floating around about the job security of head coach Carl Hollis.

While there is no truth to the rumors, it still has played a role on both the players and the coaches.

And against the Eagles, the CHHS took out any frustration it may have gathered from the past week or so.

Within the first minutes of the game, there were two lead changes.

The Trojans took the first lead of the game, and the Eagles answered right back with a 3-pointers to take a 3-2 lead.

From there on out, it was all CHHS, as the team in orange and blue ran out to 27-5 lead in the first eight minutes, and never looked back, cruising to a 64-26 victory.

“It was a big win,” Hollis said after wards. “And actually I think everything going on around the team helped us to this win.

The win snapped a six-game Trojan losing streak, and gave the team its first area win of the season.

After a Carroll 3-pointer gave the visiting team a 3-2 lead the Trojans took off, scoring 20 unanswered points to build a 22-3 lead.

Even though the shooting cooled off a little bit in the second quarter, the Trojan defense did not, as Carroll struggled to get anything going on offense.

The second half was no different for the Trojans, as the team increased its lead, thanks to a 15-3 run in the third quarter, to give the team a 54-20 lead.

Even though a large majority of the fourth saw many of the junior varsity Trojans on the court, CHHS still outscored Carroll, nine to six, as the home team to finished out the 64-20 win.

“I would say as far as a margin of victory, this was our best game of the season,” Hollis said.

“I think we played a great game against Andalusia in the Ozark Tournament too. But I think we played well (Tuesday night). We did a lot of things right. There is still a lot of room from improvement but this win is going to help us in the right direction – I am so proud of our guys.”

CHHS finished with three players in double-digits in points, as both Tyler Mitchell and Da’Vontai Jackson each has 16 points, while lone senior Michael Zackery finished with 14.

Mitchell also pulled down 13 rebounds for the Trojans.

“We have been doing a lot new drills the past few days to help build our confidence physically, and I think (the drills) have been helping us come together as a team,” Hollis said about his team’s all around physical play against Carroll.

“We are trying to find ways for these guys to play up to their whole potential, because they have a lot of potential.”

The win was also the first against the Eagles this season in three tries, with the first two taking place in the Ozark Tournament and at Carroll in the area opener.

While the win may just count for one on the schedule, it was one that Hollis said he was very relieved to get.

“I have just been praying for a win,” the coach said.

“I told a friend Monday that something good had to come out what had been going on the last couple of weeks. I got an old saying, ‘if you can’t bare your cross, you can’t enjoy the crown’. Sometimes, troubles are blessings in disguise. They allow you to do some heart searching.”

The Trojans will be back in action again on Friday, as the team will remain at home, this time playing host to Eufaula.