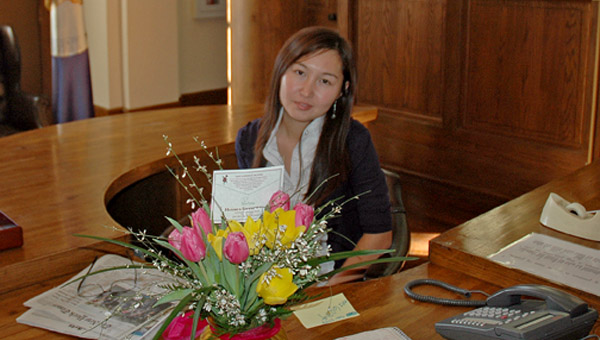 Meerim Mamyrbekova is serving an internship at Troy City Hall this semester as part of her exchange program at Troy University.

Troy City Hall has a brand new smiling face around the office.

“I applied here to see how the local government functions and to learn how to write governmental papers and resolutions, and to attend city council meetings,” said Mamyrbekova. “The mayor himself interviewed me for the position.”

Mamyrbekova is one of six Troy students participating in the Global UGRAD Program through a fellowship sponsored by the U.S. Department of State. Part of that fellowship requires the students to complete an internship during their studies in America.

Mamyrbekova says that being able to study abroad is a phenomenal privilege, but that it wasn’t easy at first.

“The food and the people were so different that I had a ‘culture shock’ at first,” she said. And I was a bit homesick. But, now, I’m too busy to be homesick.”

“They definitely go through adjustments when they get here,” said Frigge, “Many international students have the same problems with the food, weather and even air conditioning.”

Frigge explained that most international students have never had the luxury of air-conditioning, so when problems occur between roommates, it’s usually over the temperature of the room.

Mamyrbekova, however, said her working environment at Troy City Hall is just fine.

Adjusting to new surroundings may have been tough at first, but it was the kind-hearted spirit of those who work around her that made Mamyrbekova feel at home.

“The thing that really warmed my heart was that I was introduced to everyone and I was greeted at my new desk with beautiful flowers,” Mamyrbekova said.

“The atmosphere here is wonderful.”

Mamyrbekova is a fourth year student majoring in American Studies at Troy University, taking classes in U.S. history and political science, with a minor in American government.

At home she worked as an English-Kyrgyz interpreter for foreign visitors and arranged trips within Kyrgyzstan leading tour groups.

Mamyrbekova was the recipient of the Global Undergraduate Exchange Fellowship, which is funded by the U.S Department of State.

“We usually have about five to seven students that come through the Global UGRAD Program,” said Frigge, “This year, I believe we have six.”

Having already earned a diploma in Simultaneous Translation from International Ataturk-Alatoo University in her hometown of Bishkek, Mamyrbekova plans to take what she learns at Troy University and devote her time and energy toward organizing Summer schools to teach English to children and teens.

When Mamyrbekova isn’t busy studying, she is out with her new friends enjoying campus life.

Part of the Troy University experience is attending university events, and, according to Frigge, attendance among international students has increased over the years.

“I try to go to any campus events,” said Mamyrbekova, “I’m here for one year, so even if it takes me longer to study I’ll still go to the school events.”

And, although Troy University and the city of Troy have much to offer Mamyrbekova in the way of new educational experiences, she is hoping to experience more of what the U.S. has to offer.

“While I’m here, I’m trying to experience more than just the ‘Troy life,’ for example, this Christmas break I went to Washington D.C., New York City and Boston,” said Mamyrbekova.

Mamyrbekova learned to speak English thanks to a volunteer working with the Peace Corps.

“I was really influenced by the Peace Corps volunteer who taught me English,” said Mamyrbekova, “She was in Kyrgyzstan 10 years ago and this year, I found her on Facebook and she invited me to Boston.”

Apart from her interests in politics, teaching English is something Mamyrbekova treats like a hobby.

“When you go back, you’re full of energy … so, when I get back, I plan on using my energy and experiences that I’ve gained here for a position at the Peace Corps office in my home country,” Mamyrbekova said.